Tamil Nadu dismissed Hyderabad for 90 then chased down the target in 14.2 overs to register an 8-wicket win. They will face the winners of the Karnataka vs Vidarbha clash in the final. 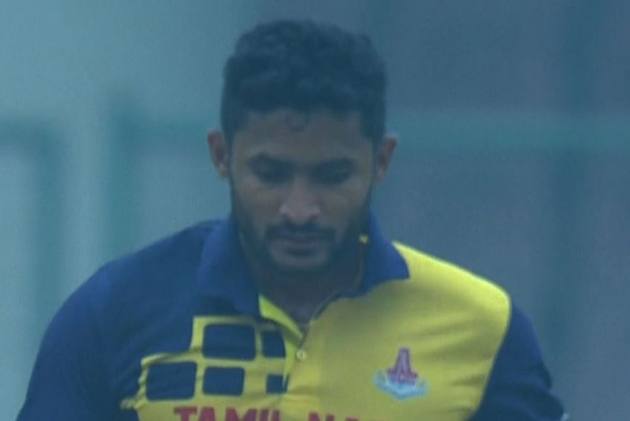 The TN bowlers backed skipper Vijay Shankar's decision to field first as they bundled out the hitherto unbeaten Hyderabad for 90 in 18.3 overs with only Tanay Thyagarajan (25 off 24 balls) reached double figures.

Saravana did most of the damage upfront as he accounted for the top order, including rival captain Tanmay Agarwal (1) and the in-form Tilak Varma (8). He finished with the sensational figure of 5 for 21, the second best ever bowling figures for TN behind Rahil Shah's 5 for 12.

Hyderabad was tottering at 30 for 5 in 6.2 overs and it soon became 39 for 6 when Ravi Teja was dismissed by M Mohammed for 9.

Late resistance by Thyagarajan and Chama Milind (8) helped Hyderabad escape complete humiliation before they folded for 90 in the 19th over.

Thyagarajan hit a huge six off Saravana and followed it up with a boundary before another attempted big shot brought about his downfall.

While chasing, Tamil Nadu lost the in-form N Jagadeesan (1) in the third over and fellow opener C Hari Nishaanth (14) in the same over to Rakshann Readdi (2/23).

But the impressive youngster B Sai Sudharsan (34 not out) and captain Shankar (43) saw the team home in the 15th over with a 76-run partnership for the third wicket.

Sudharsan batted fluently and struck a few stylish shots while Shankar, who started cautiously, began hitting the ball powerfully after getting his eye in. He finished the game by smashing a four and six off Rakshann Readdi.

Tamil Nadu awaits the winner of the Karnataka vs Vidharba semi-final clash in Monday's final.