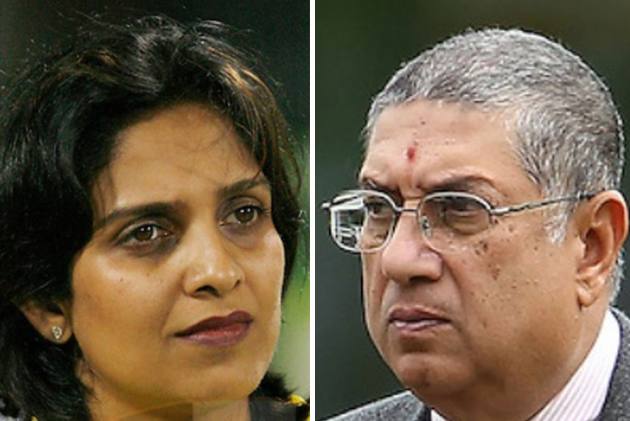 More than six years after her father N. Srinivasan was barred from contesting BCCI elections for conflict of interest, Rupa Gurunath has been found guilty of the same offence on Thursday. (More Cricket News)

In a rare and significant order made by the Board of Control for Cricket in India's ethics officer Justice D.K. Jain, Rupa Gurunath has been found wearing several hats. This is against the constitution of the BCCI.

Rupa Gurunath was elected as the president of Tamil Nadu Cricket Association in 2019. She continues to be a whole time director of India Cements Limited that owns IPL franchise Chennai Super Kings. BCCI rules forbid this.

Justice Jain's order is expected to open a box of worms in BCCI, an organisation that has been afflicted with conflict of interest featuring politicians, businessmen and top players.

The order is a victory of sorts for Sanjeev Gupta, a relentless whistleblower, who has listed several cases of conflict against officials, including current BCCI president Sourav Ganguly.

There are at least four more cases waiting for disposal at Justice Jain's office. One of these is against BCCI vice-president Rajeev Shukla. The term of the ethics officer ends on June 7.

In his order, Justice Jain said: "The concept of conflict of interest is not necessarily a question of about something one does or intends to do but what can possibly or potentially be done. However, in so far as the rules of the BCCI are concerned, the said principle has been codified in Rule 1(A)(g) of the rules refers to the situations, where an individual associated with the BCCI in any capacity acts, or omits to act, in a manner that brings or is perceived to bring the interest of the individual in conflict with the interest of the game of cricket and that may give rise to apprehensions of, or actual favouritism, lack of objectivity, bias, benefits (monetary or otherwise) or linkages, as set out in Rule 38 of the rules.

"Hence the question of conflict of interest has to be considered on the touchstone of the definition, which clearly brings within its ambit all situations, which may have even the potential of giving rise to apprehension of any kind of favouritism, lack of objectivity, bias, benefits (monetary or otherwise) or linkages by or to a person associated with the BCCI, in any capacity."

Srinivasan had met a similar fate in 2015 in the wake of the 2013 IPL match fixing and betting scam that indicted his son-in-law Gurunath Meiyappan. Srinivasan was asked to step aside by the Supreme Court in order to ensure a fair probe by a committee set up by the apex court. History has repeated itself.

Decision making is a long process in BCCI. In his order, Justice Jain has mentioned at least three hearings and several exchanges of notices to arrive at Thursday's decision. Gupta had filed his complaint on November 23, 2020 and the last hearing was on May 22, when the order was reserved. Interestingly, BCCI never appeared in the hearings.

This certainly is a landmark decision given the fact that BCCI has always been a very 'closed' organisation and its influential members have never shied away from using their financial might and connections to bend the rules as they wish.

TNCA is 'rebel' association of sorts. It is among a clutch of associations that has not fallen in line with the new BCCI constitution that was approved by the Supreme Court in August 2018.

TNCA doesn't have voting rights, doesn't get its full share of BCCI's financial assistance and yet have the muscle to contest the BCCI constitution in Supreme Court by employing the best of lawyers. It clearly hates the Lodha recommendations that had effectively ended Srinivasan's dreams of leading world cricket.

Justice Jain's report indicates the complex systems that come into play when a state association president also has stakes in a major IPL franchise like, Chennai Super Kings.

“All these facts go on to show that a circuitous web of entities, including CSKCL has been created under the umbrella of ICL. The management and governance of all such entities directly or indirectly lies in the hands of the board of ICL, notwithstanding the defence pleaded that ICL has no stake in CSKCL.

"In the given factual scenario, it can be safely inferred that the respondent (Rupa Gurunath), in her capacity as the whole time director and promoter of ICL, has close associations with the trustees of IC Shareholders Trust and the Directors of CSKCL, which has a franchise agreement with the BCCI. This is one of the recognised forms of conflict of interest.”

Rupa Gurunath case is just the tip of an iceberg. Conflict of interest is a disease that is destroying the very foundation of good governance. Indian sport needs more such verdicts.