Defending champion Hussamuddin, who is representing the Services Sports Control Board, displayed smart and mature boxing and landed plenty of punches to secure a unanimous 5-0 win. 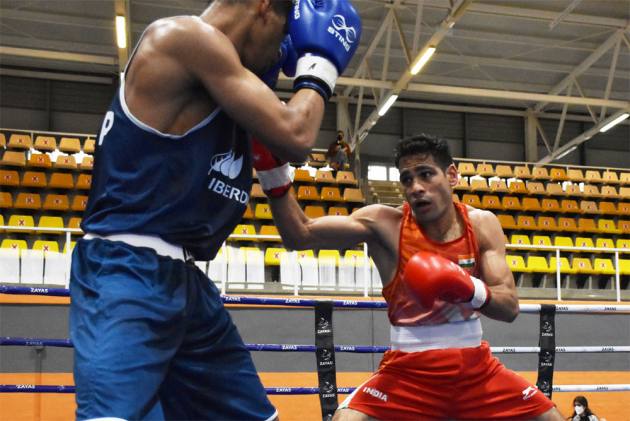 Commonwealth Games bronze medallist Mohammad Hussamuddin (57kg) stormed into the quarterfinals with a 5-0 win over Chhattisgarh's Sahil at the National Boxing Championships at Bellary, Karnataka on Saturday. (More Sports News)

Defending champion Hussamuddin, who is representing Services Sports Control Board (SSCB), displayed smart and mature boxing and landed plenty of punches to secure a unanimous 5-0 win.

He will face Rushikesh Goud of Maharashtra on Sunday.

In the other round of 16 match in the 57kg category, Haryana's Sachin was up against Manipur's Jobison Yengkokpam.

World youth champion Sachin, who caused a huge upset on Friday by defeating world championship medallist Gaurav Bidhuri, made light work of his opponent and won 5-0 to book his spot in the quarters.

In 54kg, Goa's Roshan Zamir produced a dominant show in the last round to outwit Suraj Bhan Singh of Rajasthan 3-2 in one of the closest bouts of the day.

Rajasthan's Bhim Pratap Singh (51kg) and Delhi's Rohit Mor (57kg) too progressed into the quarterfinals with identical 5-0 victories on the fourth day of the championships.

Chandigarh's Aman (67kg) and Sachin (71kg) impressed everyone with their attacking boxing as both of them won after forcing the referee to stop the contest (RSC) in the second round and sailed into the quarters.

The gold-medallists from this event will make the Indian team for the world championships in Belgrade next month.