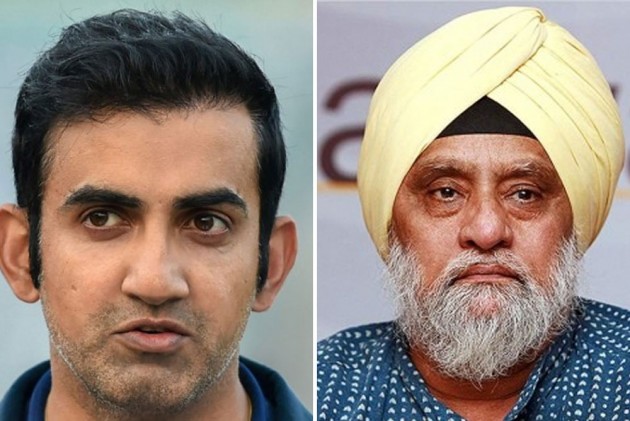 Gautam Gambhir on Sunday alleged former India captain Bishan Bedi of indulging in nepotism while trying to push his son Angad in Delhi's age-group teams after the legendary spinner said that he "can't stoop to conquer" like the veteran opener.

Gambhir and Bedi took potshots at each other after the former made a scathing attack on the latter and erstwhile DDCA selection committee chief Chetan Chauhan for trying to block Navdeep Saini's entry in the Delhi Ranji team back in 2013.

Gambhir reacted after the Karnal-born fast bowler made an impressive debut for the country in the first T20 International against the West Indies.

The 26-year-old Saini claimed three wickets for 17 runs to star in India's four-wicket win against the Windies at Lauderhill in USA on Saturday. Former India opener Gambhir took the opportunity to take a dig at the two ex India players.

Also Read: Bedi Hits Back At Gambhir Over Saini Comment

"Kudos Navdeep Saini on ur India debut. U already have 2 wkts even before u have bowled-@BishanBedi & @ChetanChauhanCr. Their middle stumps are gone seeing debut of a player whose cricketing obituary they wrote even before he stepped on the field, shame!!!," Gambhir tweeted.

Bedi responded to Gambhir in an interaction with PTI where he said: ""I don't believe that I have to stoop to conquer. I would rather not react to any comments on twitter. I have never said a negative thing about Navdeep Saini. Also I believe if someone has made it, it's his credit not any Tom, Dick or Harry's."

"BishanBedi talking about "stooping to conquer",man who was pushing his undeserving son for selection or ChetanChauhanCr bent on getting his nephew in DDCA team. Shame. Also reproducing Bedi's comments on Navdeep in a protest letter of 2013."

In fact Gambhir attached a PTI report from 2013 in which Bedi had written a letter questioning Saini's selection as he wasn't from Delhi domicile. On Sunday, Bedi denied that he had any role to play.

Bedi and Chauhan were part of a faction of the Delhi and District Cricket Association members who did not approve of Gambhir's move to bring in Haryana-born Saini in the Delhi Ranji Trophy team. They had questioned how an 'outsider' could get into the Delhi team.

This was not the first time Gambhir had taken a potshot at Bedi and Chauhan. He had done the same when Saini made it to India's Test squad for the one-off Test against Afghanistan last year. Saini, however, did not play in that Test.

Saini had said earlier that he owed his success to Gambhir and a few other senior Delhi players.