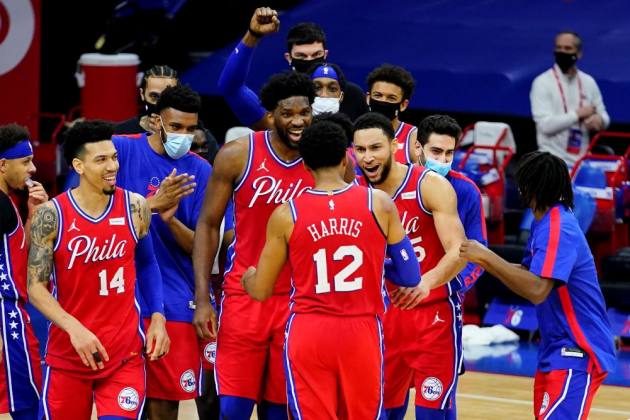 NBA leaders the Lakers had won a franchise-record 10 consecutive away games to open the season heading into Wednesday's showdown in Philadelphia.

But the Eastern Conference-leading 76ers (13-6) handed the Lakers their first road loss thanks to Tobias Harris' 15-foot jumper with 2.4 seconds remaining.

The Lakers rallied from a 100-86 with less than five minutes remaining in the final quarter, using a 13-0 run to hit the front for the first time since the opening period.

But Harris and the 76ers had the final say in a thrilling finish at Wells Fargo Center, where the forward had 24 points and Joel Embiid posted 28 of his own.

James Harden and Kevin Durant put on a show again as the star-studded Brooklyn Nets outlasted the Atlanta Hawks 132-128 in overtime.

Harden posted 31 points and 15 assists and Durant scored 32 points, while Kyrie Irving finished with 26 points away to the Hawks in Atlanta midweek.

Former MVP Harden became the first Nets player with a 30-point, 15-assist game since Stephon Marbury in 2000, and Durant recorded his 15th consecutive 20-plus point game to start the season.

Simmons with another triple-double

76ers All-Star Ben Simmons put up 17 points, 11 rebounds and 10 assists in a winning effort. It moved Simmons up to 13th on the all-time list for triple-doubles (31) – tied with Luka Doncic and Hall of Famer John Havlicek.

The Utah Jazz celebrated their 10th straight win – 116-104 over the Dallas Mavericks – behind Rudy Gobert's 29 points and 20 rebounds. Doncic's 30 points were not enough for the Mavericks.

Bradley Beal had 47 points in a losing effort as the struggling Washington Wizards were beaten 124-106 by the New Orleans Pelicans, who were led by Zion Williamson (32 points) and Brandon Ingram (32 points).

Chris Paul registered 32 points but the Phoenix Suns still went down 102-97 to his former team the Oklahoma City Thunder.

The Miami Heat are struggling to reach the heights of last season, which saw them make a run to the NBA Finals. Miami have lost four in a row following a 109-82 rout at the hands of the Denver Nuggets. Duncan Robinson was just three-of-11 from the field, making only two-of-10 three-point attempts for eight points in 36 minutes.

Domantas Sabonis was dominant yet again as the Indiana Pacers defeated the Charlotte Hornets 116-106. He recorded his sixth career triple-double with 22 points, 11 rebounds and 10 assists.

James and the Lakers will look to bounce back when they continue their season-long seven-game road trip against the lowly Pistons (4-13) in Detroit on Thursday.