The Knicks have exceeded expectations to be in the playoff picture in the East, but the Nets have their sights set on a title charge. Check match and telecast details 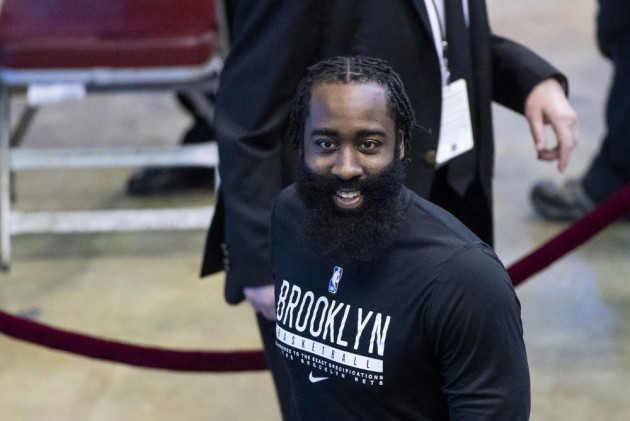 The NBA's top-ranked defense will be aiming to slow down the leading offense when the New York Knicks make the short trip to play the Brooklyn Nets. (More Sports News)

The in-form Nets have won 12 of their previous 13 games to rise up the Eastern Conference, the impressive run of form leaving them just a game back of the Philadelphia 76ers, who lead the way in the standings.

But while they were always expected to be near the summit, particularly following the arrival of James Harden from the Houston Rockets, the Knicks have been one of the surprise packages so far.

A first playoff appearance since 2013 is a distinct possibility, with coach Tom Thibodeau building solid foundations for a franchise that has chopped and changed in the hope of finding success.

Randle has excelled since moving to the Big Apple, leading to a first All-Star appearance this year. The seventh overall pick by the Los Angeles Lakers in 2014 averages 22.9 points and 11 rebounds through 39 games, as well as 5.7 assists.

His 375 defensive rebounds puts him inside the top three in the league, while he has also contributed 31 steals as the Knicks have tightened up under Thibodeau.

Having registered a season-low seven points as the Knicks returned from the All-Star break with a lopsided loss to the Milwaukee Bucks, Randle bounced back with 26 in a resounding triumph over the Oklahoma City Thunder on Saturday.

Since joining the Nets, Harden has recorded nine triple-doubles, the latest of them coming in a 100-95 victory over the Detroit Pistons on Saturday that saw him score his team's final 10 points of the contest.

While he was the focal point for Houston, the two-time MVP no longer has to carry the offensive burden in the same way for star-studded Brooklyn. He is shooting at a career-high 48.9 per cent from the field though, while his improved success from deep (39.7 per cent) has been noticeable.

Harden has also demonstrated his ability as a passer too, his tally of 363 assists comfortably the most by any player, averaging out at a whopping 11 a game.

KEY BATTLE - A CASE FOR THE DEFENSE

The continued absence of Kevin Durant has not prevented the Nets from putting up points. They average 120.6 a game, while their combined field goal percentage of 49.9 is also the best by any team in the NBA.

However, the Knicks have given up a league-low 105 points per outing. Randle and his fellow big men will look to dominate when it comes to rebounding, while the visitors will hope to get better at capitalising on turnovers – their average of 14 points when gaining possession in such circumstances ranks them 29th out of 30 teams.

"It starts with our effort, our defense, those are the most important things," Immanuel Quickley, who has impressed in his rookie season, averaging 12.5 points, said ahead of the game.

"We try to have that defensive mindset coming into games, then let everything take care of itself. The little things – defense, rebounding, energy, effort – give you a chance to win every night."

These neighbours have met in 200 regular-season games, the Knicks narrowly leading 101-99 overall.

Last season's four-game series was split 2-2, while the Nets prevailed 116-10 in January of this year, Durant – who has missed Brooklyn's last 11 games due to a heal issue – leading the way with 26 points in the absence of Kyrie Irving and with the Harden trade yet to be completed.