Stephen Curry and Luka Doncic put on a show in their Warriors-Mavericks NBA battle, while Nikola Jokic had a game to remember for the Nuggets on Saturday. 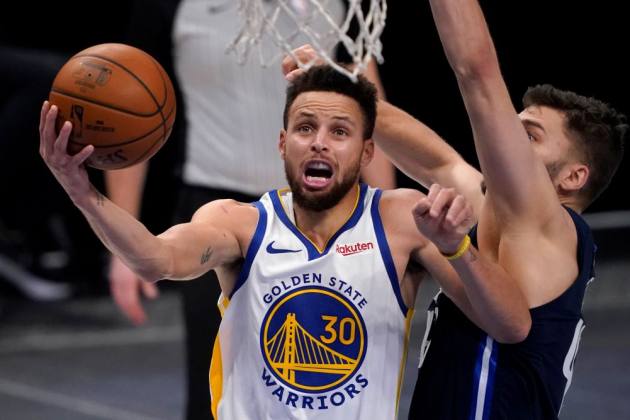 Stephen Curry joined Wilt Chamberlain as the only Golden State Warriors players to post multiple 55-point games in a season, but his team lost to Luka Doncic's Dallas Mavericks 134-32 in the NBA. (More Sports News)

Curry nailed a season-high 11 three-pointers en route to 57 points in a thrilling duel with Mavericks star Doncic on Saturday.

Former MVP Curry put up his eighth 50-plus point game in his career, however, it was not enough.

Doncic tied his career high with 42 points in Dallas, where he also had 11 assists to snap the Mavericks' six-game home losing streak.

Meanwhile, Nikola Jokic joined Carmelo Anthony and Allen Iverson as the only Denver Nuggets players with 50-plus point games in the past 20 seasons.

Jokic finished with a career-high 50 points – including 23 points in the final quarter – but the Nuggets still went down 119-114 to the Sacramento Kings.

The MVP candidate also had 12 assists and eight rebounds as the Nuggets dropped their third straight game.

Joel Embiid became the first Philadelphia 76ers player with eight consecutive 25-plus point games since Iverson in 2006. The three-time All-Star registered 33 points in a 124-108 win over the Brooklyn Nets, who were without Kevin Durant and Kyrie Irving. James Harden led the Nets with 26 points and 10 assists.

Two-time reigning MVP Giannis Antetokounmpo had 24 points and 11 rebounds for the Milwaukee Bucks, who eased past the Cleveland Cavaliers 124-99.

The Oklahoma City Thunder scored a team-record 83 points in the first half as they edged the Minnesota Timberwolves 120-118. Shai Gilgeous-Alexander posted 31 points to the Thunder.

The Chicago Bulls defeated the Orlando Magic 118-92 behind Zach LaVine's 39 points on the road.

LeBron James had 33 points and 11 assists and Anthony Davis added 30 points as NBA champions the Los Angeles Lakers prevailed 135-129 against the Detroit Pistons in double overtime.

Victor Oladipo ended the Houston Rockets' 111-106 loss to the San Antonio Spurs with nine points on four-of-14 shooting from the field. He also missed all three of his attempts from beyond the arc.

In 34 minutes of action, Rodney Hood was three-of-10 from the field and made just one of six three-point shots for seven points as the Portland Trail Blazers were beaten 110-99 by the New York Knicks.

Zion with the slam!

Zion Williamson had the final say against the Memphis Grizzlies. His game-sealing dunk saw the New Orleans Pelicans to a 118-109 win. Williamson had 29 points, while team-mate Brandon Ingram scored 27 points, collected 12 rebounds and tallied a career-high four blocks.