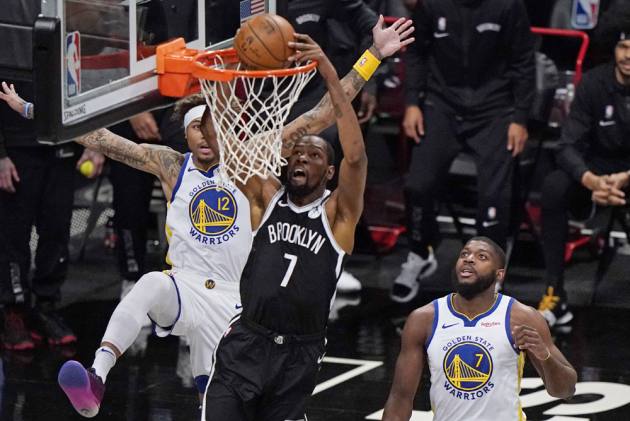 Durant played his first official game since rupturing his Achilles tendon while playing for the Warriors in Game 5 of the 2019 NBA Finals.

After sitting out the entire 2019-20 campaign, Durant made his Nets bow and posted 22 points against former team the Warriors in Tuesday's curtain raiser behind closed doors in Brooklyn.

In his Warriors reunion, Durant – who won two championships and as many Finals MVPs in Golden State – was seven-of-16 from the field in 25 minutes, while he also collected five rebounds, tallied three assists and three steals.

Nets team-mate Irving led the way with a game-high 26 points to give Steve Nash a winning debut as head coach in the first game of the shortened 72-game regular season amid the coronavirus pandemic.

Caris LeVert added 20 points for Eastern Conference contenders the Nets, who led by as many as 38 against the helpless Warriors.

Stephen Curry and his teammates were no match for the Nets in the blowout after a forgettable 2019-20 campaign.

Injuries to All-Stars Curry and Klay Thompson, coupled with Durant's departure, saw the Warriors finish with the league's worst record – 15-50.

PULL UP THEN KAI pic.twitter.com/ZJ1Jq8flEl

Two-time MVP Curry was back on the court on Tuesday but his 20 points – on seven-of-21 shooting from the field and two-of-10 from three-point range – were not enough.

Durant, Irving and Curry all scored at least 20 points in their returns on Tuesday. Excluding the 1998-99 lockout, it is the only time since the 1976-77 merger that three players who had not played an NBA game in at least nine months all scored 20-plus points in the same game, per Stats Perform.

James Wiseman – the second pick in the 2020 NBA Draft – impressed with 19 points, six rebounds and two steals on his Warriors debut.