Anthony Davis returned for the LA Lakers, while Giannis Antetokounmpo's Milwaukee Bucks handed the Philadelphia 76ers another loss in the NBA. 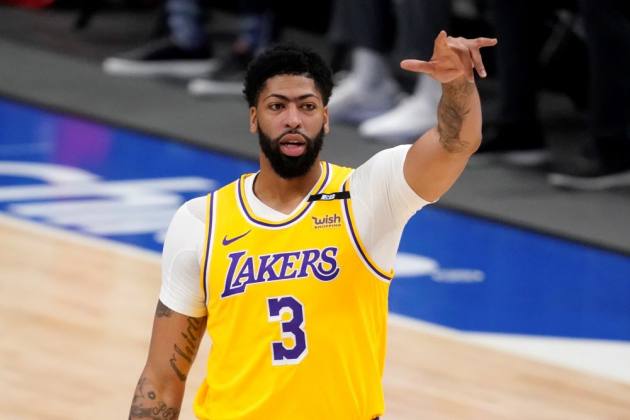 Davis had been sidelined since February 14 due to tendinosis and a calf strain in his right leg – the eight-time All-Star missed 30 games, the longest injury absence of his nine-year career.

But Davis stepped back onto the court on Thursday, finishing with four points on just two-for-10 shooting, four rebounds, one assist, one block and one steal in 17 minutes.

The Lakers – still without superstar LeBron James (ankle) – were led by Dennis Schroder (25 points and 13 assists), Andre Drummond (14 points and 19 rebounds) and Kentavious Caldwell-Pope (29 points) but fell short in Dallas.

Two-time reigning MVP Giannis Antetokounmpo put up 27 points on eight-for-15 shooting, 16 rebounds and six assists as the Milwaukee Bucks took down the slumping Philadelphia 76ers 124-117. It was his 41st 25/15/5 game, the most by a Bucks player since the three-point era (1980). No other Buck has more than four in that span. Milwaukee used a 40-26 opening quarter to hand the Eastern Conference-leading 76ers a third consecutive defeat. Joel Embiid had 24 points for the visiting 76ers.

Zion Williamson showcased his efficiency in the New Orleans Pelicans' 135-100 victory against the lowly Orlando Magic. The former number one pick had 23 points in 23 minutes on nine-for-12 shooting, while he made all five of his free-throw attempts.

It was a forgettable outing for Chuma Okeke and the Magic, who dropped their fourth straight game as they lost for the 23rd time in 28 appearances. In 29 minutes, Okeke made just one of his 12 field-goal attempts. He was 0-for-four from three-point range in a four-point performance.

Jalen McDaniels was just as bad for the Charlotte Hornets, tallying a mere three points on one-for-eight shooting as his team suffered a 106-91 defeat to the Chicago Bulls.

There was no stopping Chicago's Tomas Satoransky as he powered his way to the rim emphatically in the fourth quarter.

The Celtics (32-27) will make the trip to face the Brooklyn Nets (39-20) on Friday. Brooklyn have the chance to reclaim the top seed in the Eastern Conference after Philadelphia's loss.