The Minnesota were on the clock first on Wednesday, and opted for Anthony Edwards, instead of LaMelo Ball. 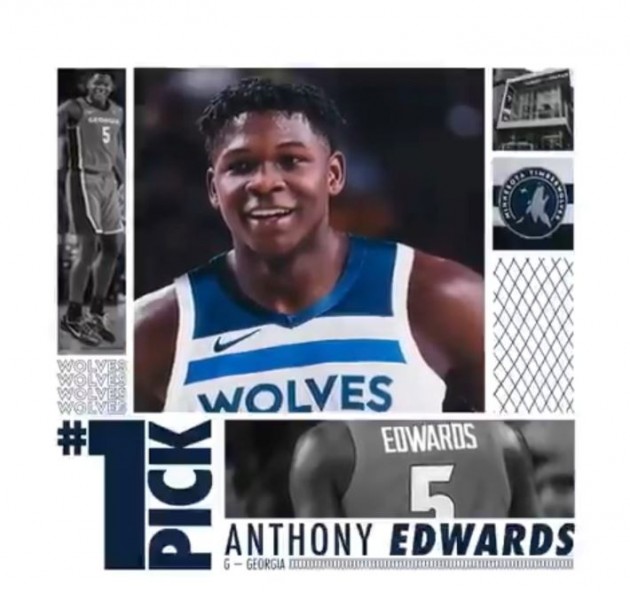 The Minnesota Timberwolves have selected Anthony Edwards with the first pick in the 2020 NBA Draft.

Minnesota were on the clock first on Wednesday, just like they were in 2015 when they drafted Karl-Anthony Towns as the top selection.

Anthony Edwards celebrates going No. 1 in the #NBADraft

He has images of his late mother and grandmother, who both died of cancer, with him âÂÂÂÂ¤ï¸ÂÂÂÂ pic.twitter.com/naxROsyQwb

LaMelo Ball had been seen as a legitimate number one pick following his impressive stint in Australia's NBL, but the Timberwolves opted for Georgia guard Edwards.

Edwards starred in his sole season in college basketball with Georgia, averaging 19.1 points per game for the Bulldogs.

He finished the 2019-20 season with 2.8 assists per game while he averaged 5.2 rebounds. Focusing solely on defensive rebounds, Edwards produced 4.5 per game.

"It's an indescribable feeling. I can't even describe it," Edwards told ESPN.

"My family is emotional, I feel like when I get off here I'm going to get emotional and I'm just blessed to be in this situation."

Edwards will now team up with Towns and D'Angelo Russell in Minnesota.

The Timberwolves missed the playoffs amid the coronavirus pandemic in 2019-20, finishing with a 19-45 record.

Minnesota have not reached the postseason since 2017-18 – their only playoff appearance in 16 years.