Giannis Antetokounmpo starred as the Milwaukee Bucks overturned a 19-point deficit to trump the Philadelphia 76ers 109-105 in overtime in NBA action. 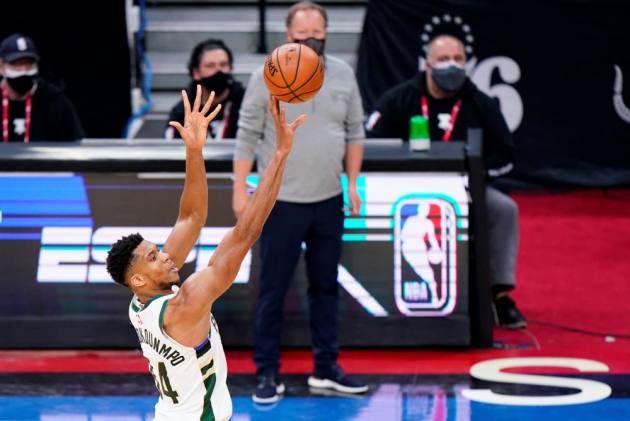 Milwaukee faced an uphill task in the second half, but the Bucks went ahead 91-84 thanks to Jrue Holiday's three-pointer with 52.3 seconds remaining in regulation on Wednesday.

The 76ers, however, went on a 9-2 run during the final 40 seconds – Furkan Korkmaz's three forcing OT 0.4 seconds from the end in the fourth period.

But Antetokounmpo and the Bucks were not to be denied a big NBA win in Philadelphia, where the Milwaukee superstar posted 10 of his 32 points in overtime.

Antetokounmpo also had 15 rebounds and five assists to lead the Bucks – who had been held their lowest-scoring first half of the season – to their fifth successive win.

Ben Simmons' triple-double of 13 points, 12 assists and 10 rebounds – to go with two steals and two blocks – were not enough to prevent the 76ers having their six-game winning streak snapped.

The Bucks are within one and a half games of the 76ers, who now share the same 28-13 record as the star-studded Brooklyn Nets.

James Harden put on a show with a triple-double as the shorthanded Nets defeated the Indiana Pacers 124-115.

Without Kyrie Irving (groin) and Kevin Durant (hamstring), Harden scored 40 points, 15 assists and 10 rebounds to lead Brooklyn to their 14th win in 15 games.

Harden, who recorded his 11th triple-double of the season, joined Vince Carter as the only players in Nets history with a 40-point triple-double.

MVP candidate Nikola Jokic was at it again. The Denver Nuggets star finished with 12 points, 10 rebounds and 10 assists in a 129-104 win over the Charlotte Hornets. It was his 10th triple-double of the season and 51st overall. Jokic also had his 228th double-double to surpass Dikembe Mutombo for the franchise record.

Russell Westbrook's triple-double (26 points, 14 rebounds and 10 assists) was his 12th of the season. The Washington Wizards, however, lost 121-119 to the Sacramento Kings.

A 43-point performance from Norman Powell was not enough as the Toronto Raptors lost 116-112 to the Detroit Pistons, who snapped a four-game skid.

Draymond Green recorded his 27th career triple-double and third his season thanks to a season-high 13 points, 10 rebounds and 10 assists. He also passed Chris Mullin (3,416) for fifth place on the Golden State Warriors' all-time assists list. The Warriors beat the lowly Houston Rockets 108-94.

Things cannot get much worse for the embattled Rockets, who crashed to a franchise-record 18th consecutive defeat. The run surpasses the 17 straight losses by the San Diego Rockets in 1968. It is the first time the Rockets have lost nine successive home games since dropping 11 in a row in 1983.

Kendrick Nunn struggled in the Miami Heat's 89-85 defeat at the Memphis Grizzlies. He was two-of-10 shooting, while making just one of five three-point attempts for five points. Goran Dragic was also poor shooting – two-of-11 from the field as he also missed all four efforts from three-point range in 28 minutes.

With the scores tied at 119-119, Sacramento star De'Aaron Fox stepped up to nail a jumper 0.7 seconds from the end.

De'Aaron Fox rises and WINS it for the @SacramentoKings pic.twitter.com/l1S4n7s9Tr

LaMelo Ball and the Hornets (20-18) will visit LeBron James and defending champions the Los Angeles Lakers (27-13) on Thursday.