NBA Commissioner Adam Silver hailed Tommy Heinsohn, who as a Boston Celtics player, coach and a broadcaster, as being 'synonymous with success' 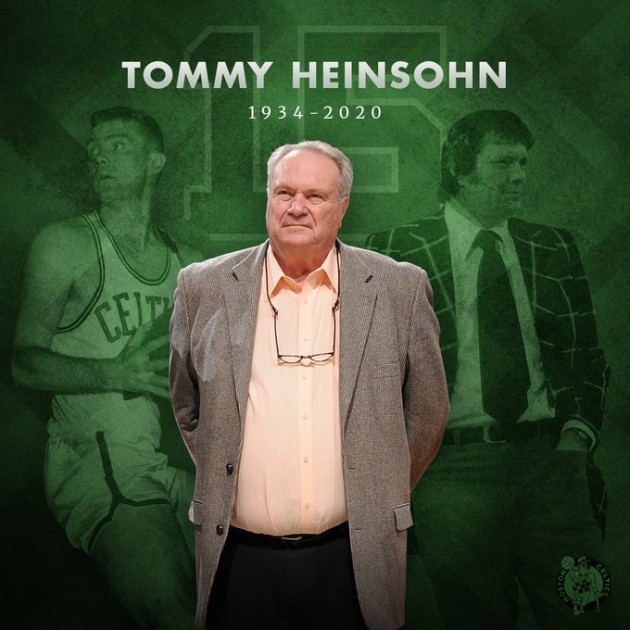 Tommy Heinsohn, who as a Boston Celtics player, coach and broadcaster over more than 60 years was with the team for all 17 of its NBA championships, died Tuesday. He was 86.

"This is a devastating loss," the team's owners said in a statement.

"Tommy was the ultimate Celtic. For the past 18 years, our ownership group has relied hugely on Tommy's advice and insights and have reveled in his hundreds of stories about Red Auerbach, Bill Russell, and how the Celtics became a dynasty. He will be remembered forever."

We take this time to celebrate Tommy Heinsohn’s life and legacy, and to share in the sorrow of his passing with his family, friends, and fans. As long as there are the Boston Celtics, Tommy’s spirit will remain alive.

NBA Commissioner Adam Silver hailed Heinsohn for being “synonymous with success,” noting that he was one of the few basketball greats inducted to the Naismith Memorial Hall of Fame as both a player and a coach, before continuing his career in broadcasting.

"Celtics games will not be the same without Tommy, and he will be dearly missed by those who share his fervor for basketball," Silver said.

A Holy Cross product who was a territorial draft pick by the Celtics in 1956, Heinsohn beat out teammate Russell for the NBA's rookie of the year award that season and tallied 39 points with 23 rebounds in Game 7 of the NBA Finals against the St. Louis Hawks.

It was the franchise's first title — and the first of eight in nine years for Heinsohn and Russell. Heinsohn was the team's leading scorer in four of the championship seasons.

Heinsohn retired in 1965 with totals of 12,194 points and 5,749 rebounds and remained with the team as a broadcaster. Celtics patriarch Auerbach tabbed him to be the coach in 1969, succeeding Russell.

Heinsohn was the NBA coach of the year in 1973, when the team won a then-record 68 games. The Celtics added championships in 1974 and '76. He was inducted into the Naismith Memorial Basketball Hall of Fame as a player in 1986 and as a coach in 2015, just the fourth person elected as both.

Shortly after retiring as a coach in 1979, he rejoined the team's broadcasts, where his unapologetic homerism has endeared him to Celtics fans ever since.

"It's hard to imagine the Boston Celtics without Tommy Heinsohn," the team said in a statement.

"There isn't a generation of Celtics fans for whom Tommy's presence hasn't been felt. He is the only person to be an active participant in each of the Celtics' 17 world championships, an extraordinary and singular legacy."

It extended beyond basketball to business. The National Basketball Players Association called Heinsohn one of its “founding fathers,” saying it would not be here “without his commitment and passion for players' rights and for that, we are forever grateful.”

"Not only did Tommy have an incredible career in the NBA as a player, coach and broadcaster, but closer to our home, he was instrumental in creating our union, taking the baton from his friend and teammate Bob Cousy and serving as our President from 1958-66,” the NBPA added.

"Tommy was truly a pioneer in player empowerment, championing the notion of free agency at a time when it was highly controversial and unpopular, and fighting to create our NBA Players' Pension Plan, under which generations of players have thrived."

Born Aug. 26, 1934, in Jersey City, New Jersey, Thomas William Heinsohn started winning not long after arriving in New England. He led Holy Cross to the 1954 NIT championship and was an All-American the following two seasons.

Once he moved on to Boston, he went to 10 All-Star Games, six as a player and four more as a coach, a role that seemed to come naturally after his years playing under Auerbach.

"He proved to be a true players' coach, respected and admired by many, but especially the people of Boston and Celtics fans everywhere,” Hall of Fame President and CEO John Doleva said.

Younger generations of fans came to love him through his commentary, whether calling it straight for CBS while working the NBA Finals in the 1980s, or with his Celtics bias sprinkled in during his years alongside Mike Gorman for local coverage.

"Roughly 2800 times I sat down with Tommy to broadcast a game. Every time it was special,” Gorman wrote on Twitter. "HOF player...HOF coach...HOF partner. Celtics Nation has lost its finest voice. Rest In Peace my friend. It has been the privilege of my professional life to be the Mike in Mike & Tommy."