Irving stepped up with 40 points after James Harden went off injured early in the Brooklyn Nets' 114-112 victory over the New York Knicks on Monday. 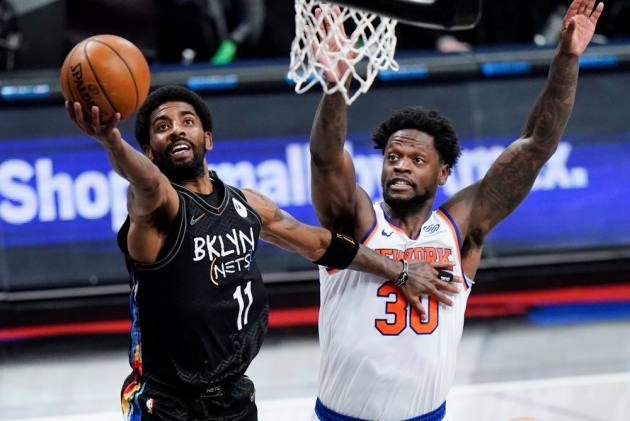 Kyrie Irving stepped up with 40 points after James Harden went off injured early in the Brooklyn Nets' 114-112 victory over the New York Knicks on Monday. (More Sports News)

In his first game back following hamstring tightness, Harden left the court after four minutes with an issue with the same hamstring and did not return.

The Nets were already without Kevin Durant, Tyler Johnson, Landry Shamet and Blake Griffin but their star point guard lifted when his side needed him, improving Brooklyn's record to 35-16 and moving them top in the East.

The Utah Jazz's nine-game winning run was halted by Luka Doncic and the Dallas Mavericks in a 111-103 win.

Doncic went close to a triple-double, finishing with 31 points along with nine rebounds and eight assists for the Mavs.

Tough bucket after tough bucket for @KyrieIrving in the @BrooklynNets win. pic.twitter.com/vnhW3pNrKj

Devin Booker dominated again with 36 points for the Phoenix Suns, who won 133-130 over the Houston Rockets to move to 35-14.

Booker has had a hot hand lately and delivered when it mattered, with 18 final-quarter points getting the Suns past the Rockets.

Chris Paul had 11 assists for Phoenix, becoming the fifth player in NBA history to reach 10 or more assists 500 times.

Russell Westbrook had another triple-double with 23 points, 14 rebounds and 11 assists but the Washington Wizards lost 103-101 to the Toronto Raptors after Gary Trent Jr's buzzer-beater.

Darius Garland scored a career-high 37 points as the Cleveland Cavaliers won 125-101 over the San Antonio Spurs.

Brooklyn's MVP candidate Harden did not last long in his return game after hamstring tightness, failing to score before being benched and tested in the locker room for a re-injury. Nets coach Steve Nash said: "Very similar to last time. He's got an awareness that something isn't right in his hammy."

Trent hit a clutch three-point buzzer-beater to earn the Toronto Raptors a dramatic victory over the Washington Wizards, completing a 19-point comeback.

In his 6th game with the @Raptors, Gary Trent Jr. pushes the ball up as time winds down and hits the #TissotBuzzerBeater from distance! #ThisIsYourTime pic.twitter.com/CE9pmjbQOa

There are a bunch of big match-ups on Tuesday but the biggest is in the East when the Boston Celtics (25-25) host the Philadelphia 76ers (34-16), who have Joel Embiid back from injury.