Irving was the hero for the Brooklyn Nets after James Harden exited due to hamstring tightness as he inspired a 120-108 win over the Houston Rockets. 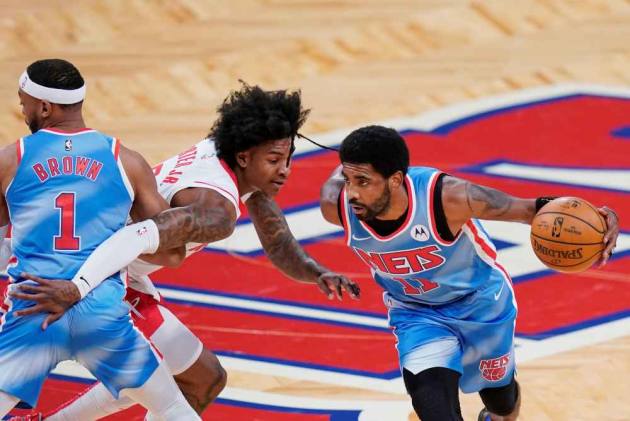 Kyrie Irving was the hero for the Brooklyn Nets after James Harden exited due to hamstring tightness as he inspired a 120-108 win over the lowly Houston Rockets. (More Sports News)

The Nets trailed by as many as 18 points, while NBA MVP hopeful Harden sat out the fourth quarter against his former team the Rockets with right hamstring tightness.

Harden finished with 17 points, eight rebounds and six assists in 27 minutes on Wednesday.

But star team-mate Irving picked up the slack, posting 31 points and a season-high 12 assists to guide the Nets to the top of the Eastern Conference.

The Nets, who have won 19 of their past 22 games, are a half-game clear of the Philadelphia 76ers.

Meanwhile, the NBA-leading Utah Jazz feared 'the end" before their 111-107 win over the Memphis Grizzlies.

Utah's charter flight was forced into an emergency landing after the plane collided with a flock of birds, causing an engine fire and failure.

After scoring 26 points to lift the Jazz, All-Star Mike Conley told reporters: "For a good 10 or 15 minutes, I think all of us on that flight were questioning if we were going to be here today.

"That's how serious it was for us. I can't speak for everybody, but I know that guys were trying to text family just in case, you know? It was that kind of situation."

"It got to that point where we were all on the plane like, 'This might be really the end'," Utah's Jordan Clarkson added in the absence of Donovan Mitchell. "I mean, it was a crazy situation. I understand fully why Don didn't come."

Giannis and Bucks take down Lakers, Booker has Suns sizzling

Devin Booker put up a season-high 45 points in the Phoenix Sun's 121-116 victory against the Chicago Bulls. Chris Paul added 19 points and 14 assists.

Luka Doncic had a game-high 36 points as the Dallas Mavericks held on to defeat the Boston Celtics 113-108. Doncic is now tied with Nikola Jokic for the most NBA games with 30-plus points, five-plus rebounds and five-plus assists this season – 15.

The Portland Trail Blazers were 124-101 winners over the Detroit Pistons thanks to a double-double of 33 points and 10 assists from Damian Lillard.

Andre Drummond's Lakers debut did not go according to plan. Acquired by the defending champions after clearing waivers on Sunday, the two-time All-Star hobbled off the court with a toe injury. Drummond was two-for-six shooting, while he missed both of his free throws prior to exiting after 14 minutes.

It was a special moment as the three Antetokounmpo brothers took to the court in Los Angeles. Two-time reigning MVP Giannis was joined by brother and team-mate Thanasis and Lakers forward Kostas post-game.

The 76ers (32-15) will look to snap a two-game losing streak and keep up with the Nets when they visit the Cleveland Cavaliers (17-30) on Thursday.