The Los Angeles Lakers returned to winning ways, LeBron James helping the NBA champions to a 105-100 victory over the Indiana Pacers. 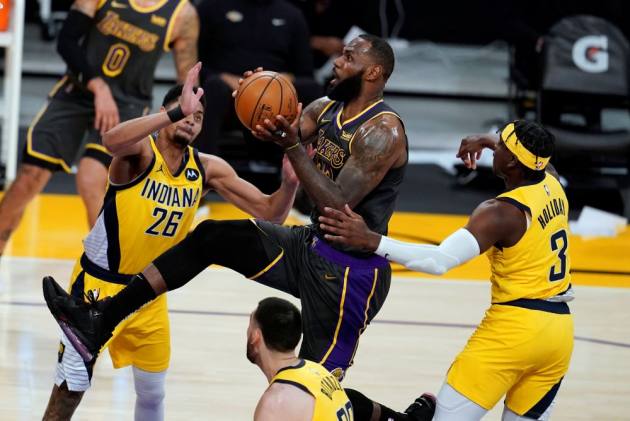 The Los Angeles Lakers returned to winning ways in their first game since the All-Star break, LeBron James helping the NBA champions to a 105-100 victory over the Indiana Pacers. (More Sports News)

The Lakers had dropped back-to-back games prior to Sunday's All-Star Game in Atlanta, but they snapped their skid at home to the Pacers on Friday.

James – who sat out the loss to the Sacramento Kings before the break – posted 18 points and 10 assists for his 16th double-double of the season.

But it was Kyle Kuzma who top-scored for the Lakers off the bench, putting up 24 points – including 15 in the final quarter – 13 rebounds and two steals.

However, Philadelphia's triumph was overshadowed by a knee injury to MVP candidate and All-Star Joel Embiid.

Embiid will have an MRI after appearing to hyperextend his knee in a scary fall in the third quarter – the 76ers big man hobbled to the locker room in pain.

He had 23 points, seven rebounds, three assists and two blocks prior to the injury in Washington.

While Russell Westbrook saw his league-leading streak of 13 double-doubles come to an end, the Wizards star surpassed 21,000 career points. With 25 points, eight assists and five rebounds, Westbrook joined James and Oscar Robertson as the only players with at least 21,000 points, 6,000 rebounds and 7,000 assists in their careers.

The 76ers snapped a 10-game losing streak away to the Wizards. Philadelphia also swept the Wizards for the first time since 2008-09.

Goran Dragic scored 20 of his 25 points in the final period as the Miami Heat defeated the Chicago Bulls 101-90. Jimmy Butler led the Heat with 28 points against his former team.

It was a forgettable outing for the Cleveland Cavaliers, who were humbled 116-82 by the New Orleans Pelicans. Cleveland scored just nine points in the third quarter. The Cavaliers shot 34.1 per cent from the field. Kevin Love – in his first game back since December – was one-of-four shooting, while he made only one of three attempts from beyond the arc for four points in 10 minutes. Isaac Okoro was one of eight from the field, while he missed both three-pointers for two points in 29 minutes.

The Orlando Magic were also swept aside 104-77 at the hands of the San Antonio Spurs. Michael Carter-Williams finished with five points on two-of-nine shooting, making just one of his three shots from beyond the arc.

The Houston Rockets were no match for the NBA-leading Utah Jazz – 114-99 – in the absence of Victor Oladipo, Christian Wood and Danuel House Jr. Ben McLemore was three-of-14 from the field for eight points. The Rockets guard was also two-of-six from three-point range. It was Houston's 15th straight loss.

After featuring in the All-Star Game, Utah's Rudy Gobert was back to business with a double-double (14 points and 13 rebounds). He put up six blocks, including an emphatic effort in the third period.

The lowly Detroit Pistons (10-27) – bottom of the Eastern Conference – will visit the in-form Brooklyn Nets (25-13) on Saturday. Brooklyn have won three straight, while Detroit have dropped back-to-back games.