Luka Doncic completed his eighth triple-double of the NBA season as the Dallas Mavericks won their fourth straight match 115-104 over the San Antonio Spurs. 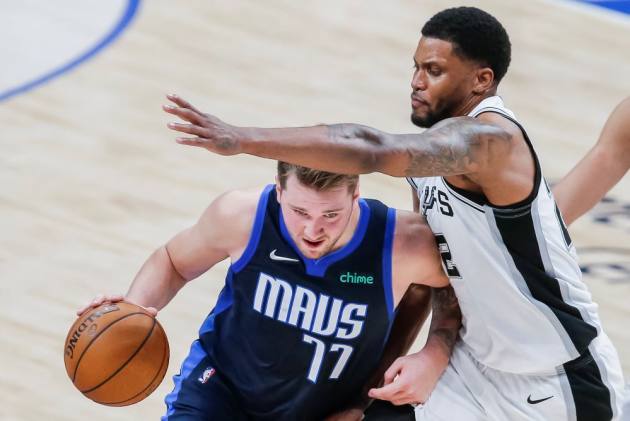 In the match-up between seventh and eighth in the West on Wednesday, the 22-year-old Slovenian finished with 22 points, 12 rebounds and 12 assists to complete his 33rd career triple-double.

Doncic is now tied with Bob Cousy in 11th on the all-time triple-doubles list.

Latvian center Kristaps Porzingis top scored with 28 points and 14 boards in a match which was tight until the Mavs pulled away in the last quarter, outscoring San Antonio 28-18.

Luka with the patience, footwork, and oop to the cutting Porzingis!@spurs 95@dallasmavs 102

Spurs had led by seven at half-time with DeMar DeRozan (30 points and 11 assists) their best but they faded to slip to an 18-15 record. Dallas improved to 19-16.

The Memphis Grizzlies stayed in the playoff hunt with a 127-112 win over the Washington Wizards, led by center Jonas Valanciunas with 29 points, 20 rebounds and four blocks.

Jonas Valanciunas throws down the lob and is FIRED UP!

The Phoenix Suns (24-11) will meet Damian Lillard's Portland Trail Blazers (21-14) in a huge Western Conference clash, while in the East the Boston Celtics (19-17) make the trip to face James Harden's Brooklyn Nets (24-13), but Kevin Durant is still unavailable with a hamstring injury.