Kevin Durant returned from injury and the Eastern Conference-leading Brooklyn Nets beat the Phoenix Suns 128-119 as the Washington Wizards rolled on. 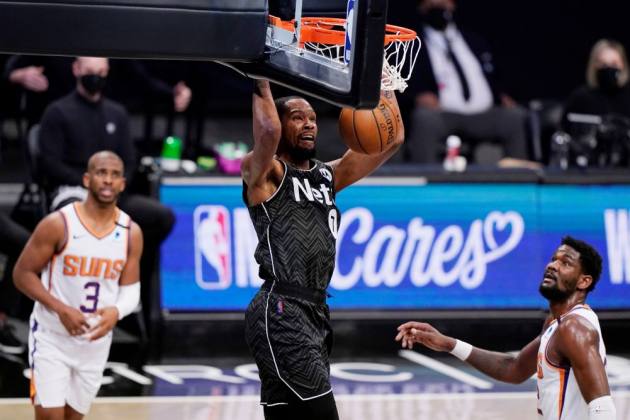 Durant made his comeback on Sunday following a three-game absence due to a thigh contusion, the former NBA MVP posting 33 points off the bench.

Nets superstar Durant was 12-for-21 shooting, including two-for-three from three-point range, while tallying six rebounds, four assists and two steals in 28 minutes.

Devin Booker's 36 points and a Deandre Ayton double-double of 20 points and 13 rebounds were not enough for the high-flying Suns (42-18) in Brooklyn.

The Washington Wizards claimed their eighth successive victory after topping the Cleveland Cavaliers 119-110. Bradley Beal scored 33 points, while Russell Westbrook added 14 points, 11 assists and five rebounds as the former MVP's triple-double run ended at four games. Washington are in the midst of their longest streak since December 2001, during Hall of Famer Michael Jordan's time with the franchise.

Two-time reigning MVP Giannis Antetokounmpo finished with 31 points and 14 rebounds, but the Milwaukee Bucks still lost 111-104 to the Atlanta Hawks. Bogdan Bogdanovic led the Hawks with 32 points, however, Lou Williams fuelled Atlanta down the stretch by scoring four three-pointers in the final seven minutes.

Double-doubles from Terry Rozier (21 points and 11 assists), P.J. Washington (22 points and 12 rebounds) and Cody Martin (13 points and 10 rebounds) inspired the Charlotte Hornets to a 125-104 victory at home to the Boston Celtics.

Stephen Curry's 37 points, seven rebounds and four assists helped the Golden State Warriors hold off the Sacramento Kings 117-113. Curry has scored at least 30 points for the 13th time in 14 games, his 30th 30-point display of the season.

Rookie Devin Cannady suffered a gruesome ankle injury as the short-handed and struggling Orlando Magic tasted a fifth consecutive defeat – beaten 131-112 by the Indiana Pacers. Cannady sustained an open fracture of his right ankle in the opening quarter after landing awkwardly.

Robert Covington was far from his best in the Portland Trail Blazers' 120-113 loss to the Memphis Grizzlies. In 38 minutes, Covington missed all seven of his field goals, including 0-for-four from three-point range, as he finished with two points.

Another game, another long-range three. Curry nailed a three-point from just inside half court against the Kings in the opening quarter.

The Philadelphia 76ers (39-21) – second in the east – will look to arrest a four-game slump when they host the lowly Oklahoma City Thunder (20-40) on Monday.