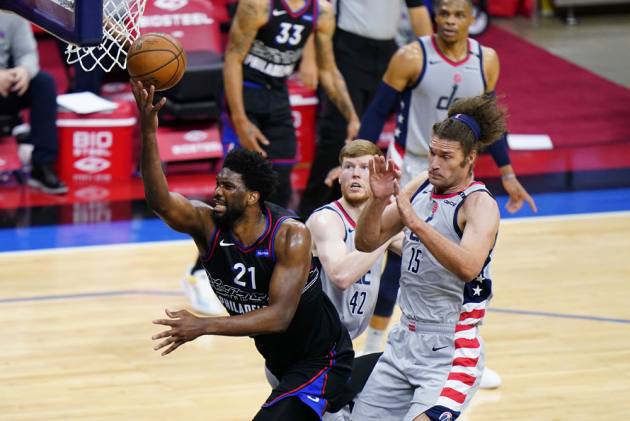 The Philadelphia 76ers are on track to advance to the Eastern Conference semi-finals after easing past the Washington Wizards in Game 2 of their NBA playoff matchup. (More Sports News)

Ben Simmons and Joel Embiid combined to guide the 76ers – eyeing a first championship since 1983 – to a 120-95 rout of the Wizards in Philadelphia on Wednesday.

As for Philadelphia's Matisse Thybulle, he became the first player in NBA history with four steals and five blocks in 20 or fewer minutes of any game, regular season or playoffs.

The game was marred by an unruly fan showering popcorn on Wizards star Russell Westbrook.

Westbrook had to be restrained after a fan in Philadelphia dumped popcorn on the former MVP as he exited the court with a right ankle injury.

Washington's Westbrook – who finished with 10 points, 11 assists and six rebounds before appearing to roll his ankle inside the final 10 minutes – was left seething at Wells Fargo Center, where Bradley Beal led the Wizards with a game-high 33 points.

Ja Morant had 47 points – the most in franchise history – but the Memphis Grizzlies still lost 141-129 to the top-seeded Utah Jazz, who levelled the Western Conference opening-round series at 1-1. Morant's 47 points are the most in playoff history by a player aged under 22, while the Grizzlies sensation is the second youngest player in league history to score 45-plus points in a postseason contest (21 years and 289 days), only behind LeBron James (21 years and 124 days in 2006). Donovan Mitchell (25 points) fuelled the Jazz in his return from an ankle injury, while Mike Conley (20 points and 15 assists) and Rudy Gobert (21 points and 13 rebounds) contributed double-doubles.

The New York Knicks won their first playoff game since 2013 after rallying to beat the Atlanta Hawks 101-92 in Game 2 of their Eastern Conference battle. Julius Randle's 15 points and 12 rebounds helped the Knicks level the series, despite 30 points from Hawks star Trae Young. Derrick Rose led the Knicks with 26 points off the bench.

Milton in game to forget

Usually a reliable contributor, Shake Milton struggled in Philadelphia's victory. Milton ended the game scoreless on 0-for-six shooting. He also had two turnovers off the bench.

There was no way past Jazz All-Star Gobert, who produced a monster block to thwart the Grizzlies in the second quarter.

Defending champions the Los Angeles Lakers will welcome the Phoenix Suns to Staples Center in LA on Thursday, with the Western Conference series locked at 1-1.