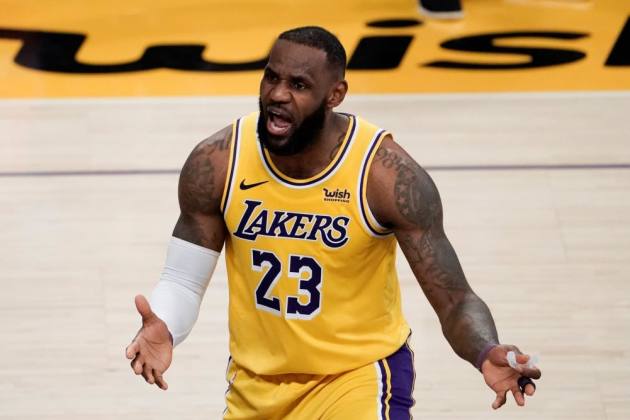 Los Angeles Lakers superstar LeBron James said he is ready to carry the load after Anthony Davis suffered a groin injury as the NBA champions lost to the Phoenix Suns. (More Sports News)

Davis sat out the second half of the Lakers' 100-92 defeat to the Suns, who levelled the Western Conference first-round series at 2-2 on Sunday.

Lakers star Davis clutched his groin area after missing a layup during the final minute of the second quarter in Los Angeles, where he is reportedly day-to-day following the injury concern.

James posted 25 points, 12 rebounds and six assists in a losing effort for the Lakers and he insisted he is ready to lead the way should Davis miss game time.

"For me, it's putting our team in position to be successful," James said afterwards.

"These shoulders were built for a reason and if it takes for me to put more on top of it then so be it.

"Win, lose or draw, I'm ready for the challenge."

Davis, who has been hampered by injuries this season – having missed 30 regular-season games, had six points, four rebounds and three assists in 19 minutes before hobbling out of the game.

A knee injury sustained in Game 3 already had Davis under an injury cloud.

"I thought he was labouring a little bit even before the groin injury," Lakers head coach Frank Vogel.

"He was saying that his knee was sore, but there was no way that he was not going to play. I thought he gave a heck of a run at it, trying to compete through pain."

Vogel added: "You know, he's one of the best players in the world, so you have to adjust.

"And I thought we gave great effort trying to overcome that loss, but it certainly wasn't enough."

Game 5 will be held in Phoenix on Tuesday.

"We kept on fighting back and got stops after stop after stop and still made it a game," James said. "But they played well. I tip my hat to them.

"They came in, played extremely well. And it's going to be a big-time Game 5 come Tuesday."