Kyrie Irving condemned the actions of an unruly fan during the Game 4 clash between the Brooklyn Nets and Boston Celtics. 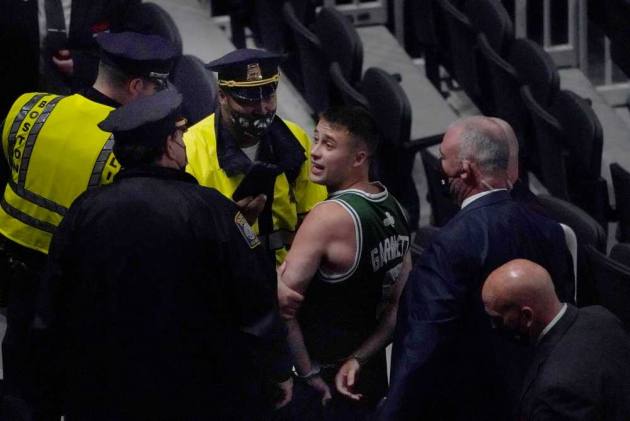 Kyrie Irving called out "underlying racism" and a "human zoo" environment in the NBA after a Boston Celtics fan threw a water bottle in the direction of the Brooklyn Nets star. (More Sports News)

The Nets topped the Celtics 141-126 in Game 4 on Sunday for a commanding 3-1 lead in the Eastern Conference first-round series, but it was overshadowed by another unruly incident.

Ex-Celtics star Irving posted 39 points and 11 rebounds to help fuel the Nets at TD Garden in Boston, where a fan appeared to throw a bottle at the 2016 NBA champion as he left the court.

It comes after former MVP and Washington Wizards guard Russell Westbrook was showered in popcorn during a defeat away to the Philadelphia 76ers in Game 2, while a New York Knicks fan spat on Atlanta Hawks star Trae Young in Game 1.

Following the latest incident in a worrying trend of fan behaviour across the league, Irving – who spent two years with the Celtics from 2017 to 2019 – told reporters: "You're seeing a lot of old ways come up.

"It has been that way in history in terms of entertainment, performers and sports for a long period of time and just underlying racism and just treating people like they're in a human zoo.

"Throwing stuff at people, saying things. There is a certain point where it gets to be too much."

Let his play do the talking.

Irving added: "You can see that people just feel very entitled out here. They paid for their tickets -- great, I'm grateful that they're coming in to watch a great performance.

"But we're not at the theatre. We're not throwing tomatoes and other random stuff at the people that are performing."

"Fans got to grow up at some point," Durant said. "I know that being in the house for a year and a half with the pandemic got a lot of people on edge, got a lot of people stressed out, but when you come to these games, you have to realise these men are human.

On the court, the second-seeded Nets flexed their muscles to move within one win of the Eastern Conference semi-finals.

A game-high 42 points from Durant, and double-doubles from Irving and Harden (23 points and a playoff career-high 18 assists) inspired the Nets.

Going for the clinch on Tuesday.

LEVEL UP WITH US, NETS WORLD

Brooklyn duo Durant and Irving also became the first pair of team-mates in NBA history to each score 35-plus points while going 10-for-10 shooting or better from the free-throw line in the same game, according to Stats Perform.

Harden – on what was most satisfying about the victory – added: "Defensively. That's going to be our key every single game. Offensively, that should be the last thing we're worried about because we have so many weapons, so many guys that can get it going.

"Defensively, we have to be engaged, to be locked in possession by possession. I think in Game 3 we weren't consistently locked in on the defensive effort and it showed. Tonight was a lot better and obviously offensively we're wrecking when we come down, the ball moves, and we play with pace.

"Defensively, our effort, and then our rebounding was great too. Ky did an unbelievable job with 11 rebounds. That's elite right there. That's winning basketball."