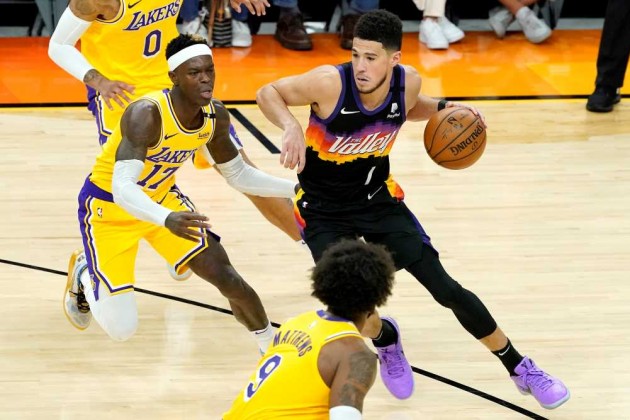 The Phoenix Suns moved 3-2 ahead in their NBA first round playoffs series against the Los Angeles Lakers with a 115-85 victory but star guard Chris Paul went down after re-injuring his shoulder. (More Sports News)

Devin Booker top scored for the Suns with 30 points, seven rebounds and five assists as the Suns move within one win of knocking out the reigning champions.

The Suns, however, will be sweating on Paul's fitness ahead of Game 6 after going down clutching his sore right shoulder, having played 23 minutes, with nine points and six assists.

Phoenix blew the game open with a remarkable 32-10 second quarter, opening up a 32-point half-time lead which the Lakers, who were without Anthony Davis, never threatened in the second half.

LeBron James top scored with 24 points including six three-pointers along with five rebounds and seven assists, while Andre Drummond had seven points and 13 rebounds.

The series returns to Los Angeles for Game 6, before the final match in Arizona if required.

Jokic finished with 38 points, 11 rebounds and nine assists, while Michael Porter Jr had 26 points, including a clutch late three-pointer along with 12 rebounds and three assists.

Lillard remarkably scored 55 points for the defeated Blazers, along with six rebounds and 10 assists, although he may regret passing to CJ McCollum with nine seconds left at 143-140 down. McCollum mis-controlled and stepped out of play, forcing the decisive turnover.

In a back-and-forth encounter, McCollum had earlier drained a three-pointer to send the game into over-time.

James Harden is the first Nets player to post a playoff triple-double since Jason Kidd in 2007. @EliasSports pic.twitter.com/cgDzfCWRji

The Brooklyn Nets finished the job in their first round series against the Boston Celtics with James Harden starring in a 123-109 win which completed a 4-1 victory.

Harden produced a triple-double, scoring 34 points with 10 rebounds and 10 assists for the Nets.

Kyrie Irving added 25 points, while Kevin Durant contributed 24, including four three-pointers shooting at 66 per cent from beyond the arc.

The Nets will next face the Milwaukee Bucks in the Eastern Conference semifinals.

Jayson Tatum was a lone hand for the Celtics, managing 32 points, although he shot poorly, albeit regularly under intense heat, at 12-from-27 from the field and 36.4 per cent from beyond the arc.

History-making haul in losing cause

Lillard's 55 points came in a losing cause, making history as the third most in a defeat in NBA playoffs history behind Michael Jordan's 63 against the Celtics in 1986 and Donovan Mitchell's 57 against the Nuggets in 2020. He also had a record 12 threes.

The New York Knicks will look to stay alive as their first round playoffs series returns to Madison Square Garden against the Atlanta Hawks trailing 3-1.