Jayson Tatum helped the Boston Celtics bounce back against the Brooklyn Nets in the NBA playoffs, while Kawhi Leonard led the Los Angeles Clippers. 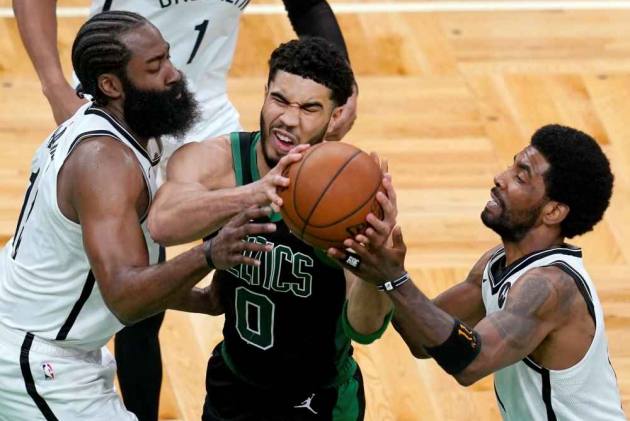 Jayson Tatum was the hero as the Boston Celtics bounced back against the star-studded Brooklyn Nets, winning 125-119 in Game 3 of their Eastern Conference opening-round matchup. (More Sports News)

Tatum posted a playoff career-high 50 points to thwart James Harden, Kevin Durant and the high-flying Nets in Boston on Friday.

The second-seeded Nets had seized control of the NBA playoff series following back-to-back wins in Brooklyn, but Tatum and the Celtics hit back on home court to cut the deficit to 2-1.

Tatum became the third Celtics player with 50-plus points in a regular playoff game, according to Stats Perform. The All-Star joined John Havlicek (54 in 1973) and Sam Jones (51 in 1967).

The 23-year-old Tatum also became the third youngest player in NBA history to post 50 or more points in a postseason contest. Ricky Barry (55 in 1967) and Michael Jordan (63 in 1986) are the only other players.

Big performances from former MVPs Harden (41 points and 10 assists) and Durant (39 points and nine rebounds) were not enough for the Nets.

Harden and Durant became the first pair of team-mates with 30-plus points in a playoff game since Vince Carter and Richard Jefferson in 2006.

With their backs against the wall, the Los Angeles Clippers topped the Dallas Mavericks 118-108. Kawhi Leonard (36 points in 13-for-17 shooting) and Paul George (29 points) fuelled the fourth-ranked Clippers, who closed within 2-1 of the Mavericks in the Western Conference series. The Clippers spoiled the party in Dallas, where Luka Doncic produced a playoff career-high 44 points as the Mavs raced out to a 30-11 lead before the visitors rallied in front of 17,705 fans.

All-Star Julius Randle struggled as the New York Knicks lost 105-94 to the Atlanta Hawks, who claimed a 2-1 series lead in the east. Randle finished with a double-double of 14 points and 11 assists, but he was just two-for-15 shooting. Per Stats Perform, Randle became the first Knick to go 0 of eight or worse on two-pointers in a playoff game since Patrick Ewing (0 for 10) did so 27 years ago. Randle's 20.6 two-point percentage in the series is the lowest in a three-game span by any player with that many attempts in the last 30 postseasons.

While the Celtics won, Kemba Walker underwhelmed. He was just three-for-14 shooting as he finished with six points in 34 minutes.

Trae Young was hot again for the Hawks after posting 21 points and 14 assists. The Hawks star joined Stephen Curry, Chris Paul, Kevin Johnson, Magic Johnson and Oscar Robertson as the only players to record more than 30 assists in their first three career playoff games. Young recorded 10 assists in the first half – the first player to achieve the feat in a half of a playoff clash in their first postseason since Rajon Rondo in 2008. According to Stats Perform, Young is the third player since the merger with 80-plus points and 30-plus assists in his first three career playoff games, joining Johnson and Paul.

The Milwaukee Bucks can seal a series sweep of the Miami Heat on Saturday. Eastern Conference rivals and top seeds the Philadelphia 76ers are also in action against the Washington Wizards, leading 2-0.