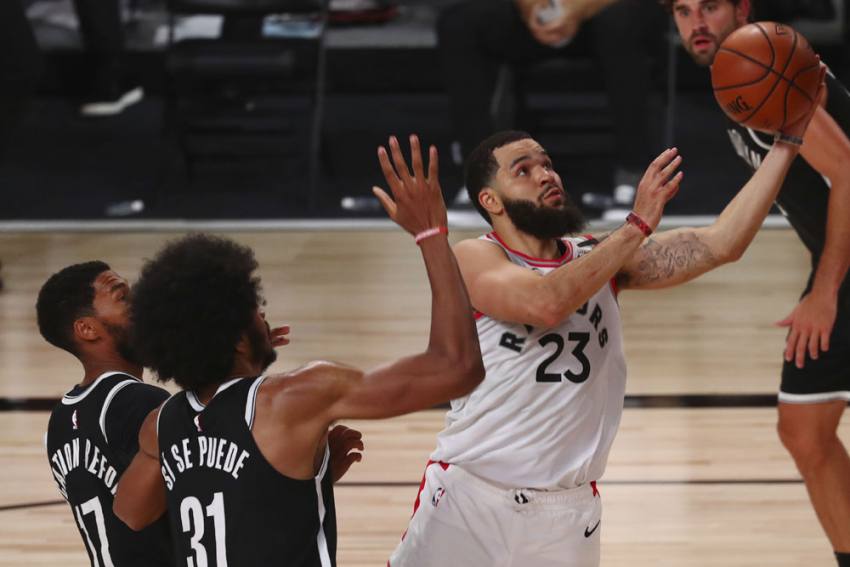 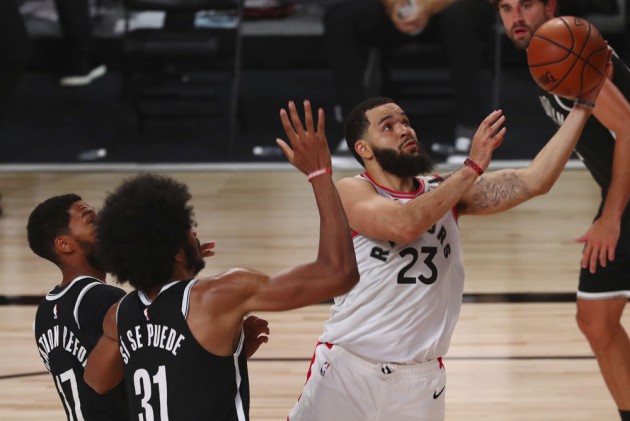 Defending champions the Toronto Raptors made a winning start in the NBA playoffs, while the Los Angeles Clippers topped the Dallas Mavericks. (More Sports News)

Fred VanVleet posted a playoff career-high 30 points and 11 assists as the Raptors eased past the Brooklyn Nets 134-110 in game one of the first-round Eastern Conference matchup at Walt Disney World Resort on Monday.

VanVleet became the first Raptors player in franchise history to combine 30-plus points and 10-plus assists in a playoff game.

The Raptors star was also eight of 10 from three-point range as the second-seeded Raptors drew first blood against the Nets in Orlando, Florida, where Serge Ibaka contributed 22 points off the bench.

In the day's final game, Kawhi Leonard and Paul George starred in the Clippers' 118-110 victory over the Mavericks in the Western Conference.

Leonard's double-double of 29 points and 12 rebounds, and George's 27 points fuelled the second-seeded Clippers, who emerged triumphant in the first-round opener.

While the Mavericks lost, Luka Doncic made history. The reigning Rookie of the Year's 42 points are the most in an NBA playoffs debut in league history.

Donovan Mitchell put up huge numbers. He scored a franchise playoff-record 57 points on 19 of 33 shooting from the field but the Utah Jazz lost to the Denver Nuggets 135-125 in overtime. His scoring spree surpassed the Jazz mark of 50 set by Karl Malone in 2000. Denver's game-one success in the west was inspired by Jamal Murray, who posted 10 of his 36 points in OT. Nikola Jokic added 29 points and 10 rebounds.

Jayson Tatum had career playoff highs of 32 points and 13 rebounds as the Boston Celtics beat the Philadelphia 76ers 109-101 in game one of their first-round Eastern Conference series. Jaylen Brown put up 29 points, while the 76ers were led by Joel Embiid's 26 points and 16 rebounds.

Philadelphia were made to pay for their turnovers. In total, the 76ers turned the ball over on 18 occasions as the Celtics capitalised by scoring 21 points. Embiid had five turnovers of his own.

Kristaps Porzingis only managed 14 points and six rebounds for the Mavericks. He was three of nine from the field, and one of four from beyond the arc.

Embiid with the slam!

The 76ers All-Star was hot, especially early, against rivals the Celtics.

8 early PTS on 4-4 FGM for the @sixers big man. #NBAPlayoffs

The in-form Portland Trail Blazers will open their Western Conference first-round series against the top-seeded Los Angeles Lakers on Tuesday. Damian Lillard's Portland secured their spot in the playoffs as the eighth seed courtesy of Saturday's play-in success against the Memphis Grizzlies. The Lakers – led by LeBron James – are making their first postseason appearance since 2013.