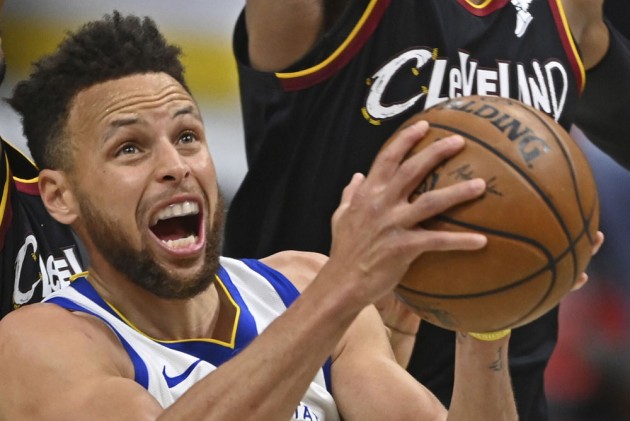 Curry starred for the Warriors on Thursday, scoring 33 points to lead the visitors past the Cavaliers in Cleveland and to their fourth successive win.

The two-time MVP – who is averaging 38.2 points amid his streak – became the first Warriors player to have at least 30 points in nine straight games since Rick Barry in 1966-67.

Andrew Wiggins added 23 points for the Warriors, while Juan Toscano-Anderson had his first career 20-point game with 20 points, seven rebounds and three assists.

The Cavaliers were led by Collin Sexton's 30 points and Jarrett Allen's double-double of 17 points and 14 rebounds.

Brown goes off against Lakers

The Boston Celtics took down injury-hit defending champions the Los Angeles Lakers 121-113 at Staples Center. Without LeBron James and Anthony Davis, the Lakers were punished by Jaylen Brown, who fuelled the Celtics with 40 points on 17-for-20 shooting, making three of his five three-point attempts to go with nine rebounds and three assists. He became the first player in franchise history to score 40-plus points with a field-goal percentage of 85 per cent or better.

Deandre Ayton (26 points and 11 rebounds), Devin Booker (23 points) and Chris Paul (13 points and 11 assists) combined as the red-hot Phoenix Suns topped the Sacramento Kings 122-114. Phoenix won their 10th consecutive home game as they reached 40 victories for the first time since 2014.

Brook Lopez was efficient with 19 points and 12 rebounds on seven-for-10 shooting, while he was three-of-six from three-point range as two-time reigning MVP Giannis Antetokounmpo returned from a six-game injury lay-off in the Milwaukee Bucks' 120-109 success against the Atlanta Hawks.

It was not a memorable outing for Lakers pair Wesley Matthews (three points) and Kentavious Caldwell-Pope (two points), who were both one-for-seven shooting in 23 minutes as starters. Matthews made one of his six attempts from beyond the arc, while Caldwell-Pope missed all three of his efforts.

Kevin Love – an NBA champion with the Cavaliers – finished two-for-10 shooting against the Warriors. The veteran (five points) only nailed one of his seven three-point attempts on a rough day.

Jayson Tatum had five assists against the Lakers, including a behind-the-back dime to tee up Celtics team-mate Tristan Thompson.

this Tatum DIME to Tristan Thompson.. @celtics lead at the half on TNT. pic.twitter.com/z2mxjXNCiN

A blockbuster clash will see the in-form Los Angeles Clippers (39-18) visit the Eastern Conference-leading Philadelphia 76ers (38-17) on Friday. The Clippers have won seven straight, while the 76ers are in the midst of a three-game winning run.