LeBron James moved into second for most points on Christmas Day in NBA history, posting 22 to go with 10 assists and seven rebounds in the Lakers' 138-115 victory 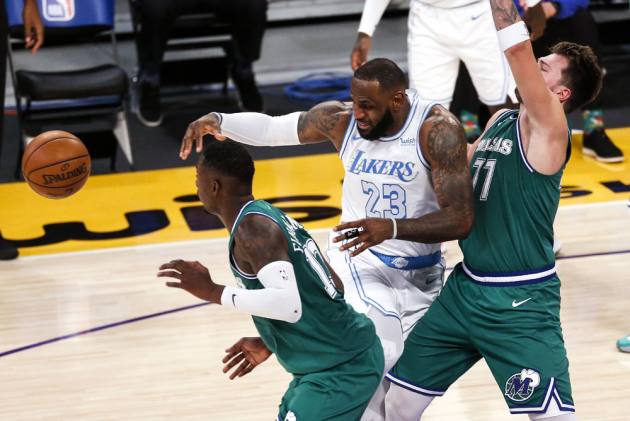 LeBron James helped the Los Angeles Lakers past the Dallas Mavericks in the NBA, while the Brooklyn Nets dominated the Boston Celtics. (More Sports News)

James moved into second for most points on Christmas Day in NBA history, posting 22 to go with 10 assists and seven rebounds in the Lakers' 138-115 victory.

Only Kobe Bryant (395) has scored more points on the day than James, who surpassed Oscar Robertson (377) and moved onto 383.

Anthony Davis also starred with 28 points, eight rebounds and five assists as the Lakers claimed their first win of the season.

No dribble needed... showtime on the break early in LA! #NBAXmas on ABC/ESPN pic.twitter.com/bmxaqXreaZ

Kevin Durant and Kyrie Irving combined to lead the Nets past the Celtics 123-95.

Durant (29 points) and Irving (37 points, eight assists and six rebounds) dominated in the Nets' victory. The latter equalled the record for three-pointers (seven) made in a game on Christmas Day.

Khris Middleton led the Milwaukee Bucks to a 138-99 thrashing of the Golden State Warriors, finishing with 31 points, five assists and four rebounds.

Duncan Robinson and Erik Spoelstra made history during the Miami Heat's 111-98 win over the New Orleans Pelicans. Robinson (23 points) equalled the Christmas Day record with seven three-pointers. Spoelstra, meanwhile, improved to 8-0 on the day, setting the record for most wins on Christmas Day without a loss. Jimmy Butler, meanwhile, suffered an ankle injury for Miami.

Paul George (23 points) and Kawhi Leonard (21) guided the Los Angeles Clippers past the Denver Nuggets 121-108. Leonard was left bloodied late in the game after a collision.

The Celtics went 37-of-98 from the field against the Nets, with Marcus Smart (four-of-12) in particular struggling.

Durant and Irving are already showing what they are capable of together at the Nets, combining for 66 points against the Celtics.

The Philadelphia 76ers (1-0) will look for back-to-back wins to begin the season when they face the New York Knicks (0-1) on Saturday.