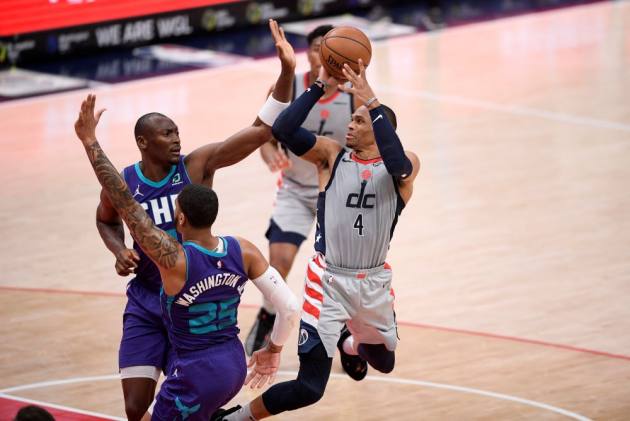 Russell Westbrook produced his third consecutive triple-double but it was not enough to inspire the Washington Wizards to victory as they went down 114-104 to the Charlotte Hornets on Tuesday. (More Sports News)

Westbrook, who made NBA history with 35 points, 14 rebounds and 21 assists on Monday, was outstanding again with Bradley Beal out for the Wizards with 22 points, 15 rebounds and 14 assists.

However, despite LaMelo Ball's absence, the Hornets got the edge after a strong first half which left the Wizards playing catch-up.

Gordon Hayward stepped up for Charlotte with 15 first-quarter points, to finish with 26 points, 11 rebounds and six assists, while Terry Rozier (27 points) was clutch at the business end.

Terry Rozier steps back and fires from deep to extend the @hornets lead late! pic.twitter.com/wEjUlzGYOa

Eastern Conference leaders Philadelphia 76ers lost their second straight game as they were humbled 104-95 by the Denver Nuggets.

The 76ers are starting to feel the effects of missing Joel Embiid with a knee injury, as MVP candidate Nikola Jokic scored 21 points and had 10 rebounds for Denver.

The Phoenix Suns moved into second in the Western Conference with a 32-14 record after a 117-110 victory over the Atlanta Hawks.

Dario Saric scored 20 points off the bench for the Suns, while Deandre Ayton had 14 rebounds along with his 13 points.

The Los Angeles Clippers let slip a three-quarter-time lead to lose 103-96 to the lowly Orlando Magic.

The @OrlandoMagic prevail in LA! pic.twitter.com/zR5zuCgz15

The Clippers actually led 51-37 at half-time and by as many as 16 points against the Magic before an awful second-half showing as they were outscored 66-45.

There is lots of love for Westbrook right now and he produced a nice play, driving past two into the key and slamming over Hornets center Bismack Biyombo.

LeBron James may be out of action but the Los Angeles Lakers' (30-17) match with Giannis Antetokounmpo's Milwaukee Bucks (29-17) looms large on Wednesday.