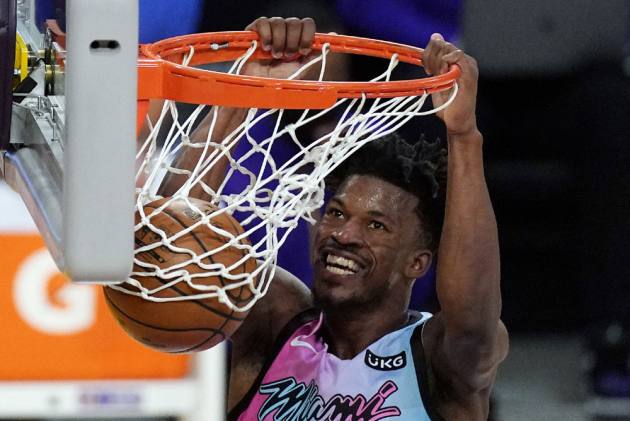 In a rematch of last season's NBA Finals, which LeBron James and the Lakers won, the Heat came out on top in Los Angeles.

The Heat led by as many as 10 points in the fourth quarter before the Lakers rallied, but Miami held on at Staples Center.

James led the slumping Lakers – who have lost back-to-back games – with a team-high 23 points.

It was a memorable day for Chris Paul and the Phoenix Suns, who routed the Memphis Grizzlies 128-97. Paul passed Oscar Robertson for sixth place on the all-time assists list. Robertson had 9,887 assists. The Suns, meanwhile, nailed a franchise-record 24 three-pointers.

Zach LaVine's 38 points inspired the Chicago Bulls to a 122-114 victory over the Sacramento Kings. LaVine made 15 of 20 shots in his fourth consecutive game with 30 or more points.

Russell Westbrook (27 points, 13 assists and 11 rebounds) and Bradley Beal (37 points) teamed up to guide the Washington Wizards to an 118-111 victory at the Portland Trail Blazers, who had their six-game winning streak snapped. Damian Lillard's 35 points and 12 rebounds were not enough for the Blazers.

Alex Caruso dished off four assists, but it was a tough night for the Lakers shooting guard in a scoreless outing. He was 0-of-three from the field, missing both of his three-point attempts.

The less said about the Grizzlies' performance from beyond the arc, the better. Memphis were just five-of-33 from three-point range – shooting at 15.2 per cent in a crushing defeat at home to the Suns.

PUT SOM RSPECT ON HIS NAMâÂÂ¼ï¸ÂÂ

It will be a blockbuster battle on Sunday when the Brooklyn Nets (19-12) visit the Los Angeles Clippers (22-9). The Nets will be without Kevin Durant (hamstring) for a fourth consecutive game. Both teams are second in their respective conferences.