The Los Angeles Lakers slumped to back-to-back losses in the NBA, while the Clippers got past the Miami Heat 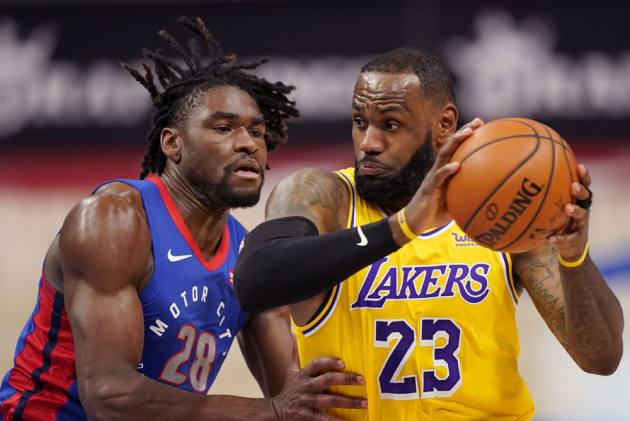 The Los Angeles Lakers slumped to back-to-back losses in the NBA, while the Clippers got past the Miami Heat on Thursday. (More Sports News)

The Lakers dropped two straight games for the first time this season, beaten 107-92 by the Detroit Pistons.

LeBron James posted a double-double of 22 points and 10 assists, to go with seven rebounds, but the Lakers were beaten.

A day after losing to the Philadelphia 76ers, the Lakers were without Anthony Davis (quad).

Still without Kawhi Leonard and Paul George due to the NBA's health and safety protocols, the Clippers recorded a 109-105 win over the Heat.

They had six players in double-figures for points, with Serge Ibaka (10 points and 13 rebounds) finishing with a double-double.

The Clippers became the first team in the shot-clock era to win a game despite being outscored by 14-plus points in the first and fourth quarters, as per Stats Perform.

Victor Oladipo finished with 25 points, seven rebounds and five assists in the Houston Rockets' 104-101 win over the Portland Trail Blazers.

Stephen Curry posted 27 points, but the Golden State Warriors were well beaten by the Phoenix Suns 114-93.

Kelly Oubre Jr. (one-of-11) and Draymond Green (one-of-seven) struggled from the field for the Warriors, combining for just six points.

Wood with the dunk

Christian Wood continued his good form with 22 points, including a big dunk, and 12 rebounds for the Rockets.

The long strides, extension, and SLAM for Christian Wood!@trailblazers 50@HoustonRockets 53

The Brooklyn Nets (12-8) are riding a three-game winning streak ahead of facing the Oklahoma City Thunder (8-9) on Friday. Nets stars Kevin Durant and James Harden are set to come up against their former team.