Charlotte Hornets rookie LaMelo Ball was at it again, while Giannis Antetokounmpo returned to the floor following a minor back injury 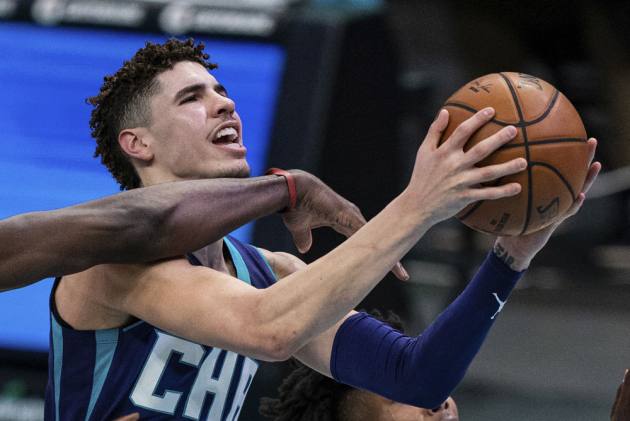 LaMelo Ball made more history as the Charlotte Hornets defeated the New York Knicks 109-88 in the NBA on Monday. (More Sports News)

Ball became the youngest player in NBA history to record a triple-double on Saturday, and he was at it again for the Hornets – who won their fourth straight game.

The Hornets rookie became the first player aged 19 or younger in league history to lead his team in both rebounds and assists in three consecutive games.

Ball finished with eight points, a career-high 14 rebounds and seven assists as star Hornets team-mate Gordon Hayward posted 34 points, including 28 in the first half.

Antetokounmpo was in action following a one-game absence due to a minor back injury and scored 22 points, while Bucks team-mate Khris Middleton led the way with 20 points and 10 rebounds.

The Washington Wizards ended their three-game losing streak and claimed their first home win of the season thanks to Bradley Beal's 34 points and a 128-107 victory over the Phoenix Suns. Devin Booker had 33 points for the Suns.

Nikola Vucevic put up 28 points and 13 rebounds for the beaten Magic in Orlando.

Pascal Siakam recorded a triple-double of 22 points, 13 rebounds and 10 assists but the struggling Toronto Raptors still lost 112-111 to the Portland Trail Blazers. CJ McCollum (30) and Damian Lillard (23) combined for 53 points.

It was a forgettable outing for the Knicks, who were just 39.1 per cent from the field and 24.3 per cent from three-point range. New York's Immanuel Quickley made just one of 10 field goals, while he missed all six attempts from beyond the arc for three points in 29 minutes.

McCollum nailed the game-winning shot with 9.6 seconds remaining to lift the Trail Blazers.

CJ McCollum handles, gets to his spot, and puts Portland ahead for good!