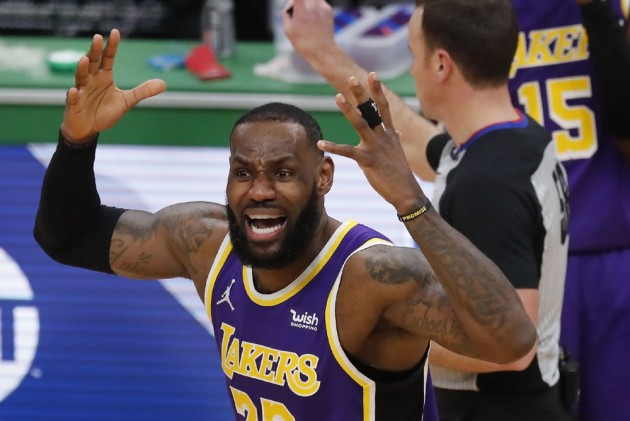 James put up 30 points, 13 rebounds and seven assists as the reigning NBA champions leaned on their defense in the 112-104 victory over the last-placed Minnesota Timberwolves.

Without the injured Anthony Davis, Dennis Schroder played the supporting role for James, posting 24 points, while the Lakers battled to claim eight steals and seven blocks in a closely fought contest.

After taking a two-point lead into the fourth quarter at Target Center, the road side pulled away in the closing stages to improve to 22-7 in second place in the Western Conference.

LeBron James for the @Lakers so far this season:

This would be the 4th time in his career he averaged 25/7/7 while winning at least 75 percent of his games played in a season. No other player in NBA history has even had one such season.

Harden pulled out the stops with a double-double to lead the Nets to a sensational 128-124 comeback win against the Suns, despite playing without Irving after the star guard felt tightness in his lower back.

Nets coach Steve Nash revealed Irving received treatment at half-time of Brooklyn's win against the Sacramento Kings on Monday but expects the six-time All-Star to only be sidelined in the short term.

The Nets surged, scoring 40 fourth-quarter points to turn around a 24-point deficit, with Harden (38 points, 11 assists and seven rebounds) backed up by Joe Harris (22 points) as they halted the Suns' six-game winning streak.

The @BrooklynNets trailed by 21 at halftime tonight before rallying to win.

Nikola Jokic lit up the Boston Celtics, scoring 43 points, but the Denver Nuggets could still not make triple-digits as their three-game winning stretch was ended in a 112-99 loss.

Zion Williamson shot an efficient 31 points, sinking 13 of his 16 field-goal efforts and going four-of-four from the free-throw line, as the New Orleans Pelicans snapped a three-match losing run with a 144-113 win over the Memphis Grizzlies.

Zion Williamson is the only player in NBA history to average 23+ points per game on 60% or better field goal percentage through their first 50 career games. pic.twitter.com/VyLRsF1ljF

Bazley struggles to take his chances

The Thunder never recovered against the Blazers after falling 34-21 behind in the first quarter and forward Darius Bazley was one player that could not find his range.

Bazley shot four from 16 from the field for 14 points during his 36 minutes on court, only dropping one his seven efforts from three-point range.

Giannis powers up but the Raps edge the Bucks

Giannis Antetokounmpo proved unplayable at times, scoring 34 points in the Milwaukee Bucks' 124-113 loss against the Toronto Raptors, as he ghosted past three defenders for one of his buckets.

There has been no stopping the Utah Jazz, who have won eight straight and 19 of their past 20 games to establish a lead in the Western Conference, but a tough challenge awaits when they go on the road to face the third-placed Los Angeles Clippers on Wednesday.