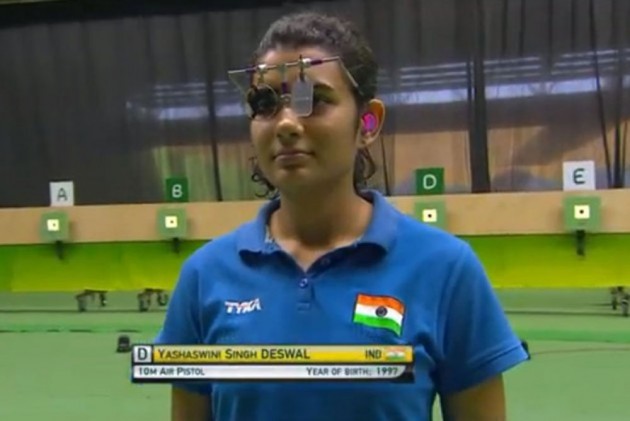 Yashaswini Singh Deswal says the Rio World Cup gold will act as a reassurance as the Indian shooter gets down to improve the "little things" in her quest for success at next year's Olympic Games.

The 22-year-old secured India's ninth Olympic quota after shooting down the gold medal in the women's 10m air pistol at the World Cup in Rio de Janeiro.

In an authoritative display, the former junior world champion recorded 236.7 in the eight-woman final of the season's fourth ISSF World Cup to upstage numero uno shooter Olena Kostevych of Ukraine.

"I feel very happy after winning the medal and quota place. My hard work finally bore fruit. For me, this medal is a reassurance that I was on the right track. It came at the right time. I needed this boost," she told PTI during a function here.

"My actual journey has now started after winning the medal and it will be as important as winning the quota. Whatever is the competition, every shot will be important and I'll have to produce my absolute best," added the Jakarta Asian Games bronze medallist.

Yashaswini, who had aggregated 582 to top the qualifications in Rio, said she needs to improve her scores as the Olympics approaches.

"Technically, I don't have to make any major adjustment but I have to improve my shot timing in each tournament and of course work on physical conditioning," said the Indian, who claimed two gold medals this season in the World Cups.

"I will have to work on the little things which will help me in my journey to the Olympics. Now the trials are going on and then there is Asian Championship and World Finals," added Yashaswini, who is a student of Economics.

Asked about her role model, Yashaswini said: "In the Indian team, Jitu Rai is my all time favourite. I really idolise him. I sometimes speak to him and seek his advice.

"He has achieved so much only on the basis of his hard work and he has seen ups and downs in life. It is very motivating, so I really look up to him."

"The Indian team is giving good competition to each other. Each player boosts the performance of others. All the youngsters are so motivated and it is inspiring," she said.

Asked how did she take up shooting, Yashaswini said: "My uncle was in Army. He was on the verge of taking VRS and we had gone to his unit and I had fired with army guns but it was very different and I was amused by the experience.

"I later went to Commonwealth Games in 2010 and there I met my coach."