Asia's last representatives at the Women's World Cup were both knocked out on Tuesday, with Netherlands and Italy going on to the quarters. 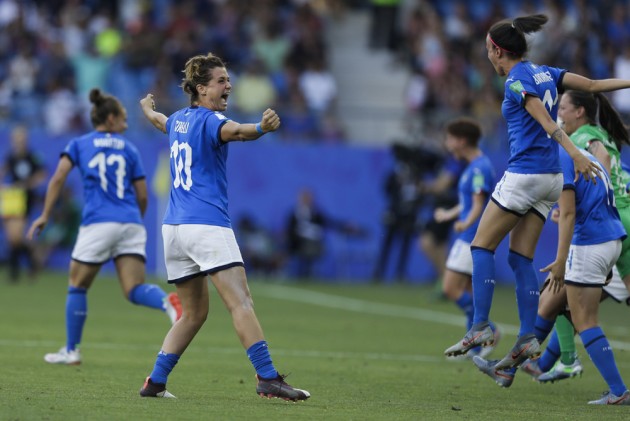 Netherlands and Italy will meet in the quarter-finals of the Women's World Cup, with China and 2015 finalists Japan exiting in the last 16.

China fell to the Azzurri before Netherlands triumphed 2-1 thanks to a harsh late penalty that means seven of the quarter-finalists are European.

Lieke Martens struck twice as Netherlands earned revenge for their defeat to Japan by the same scoreline in the last 16 in Canada four years ago.

Martens opened the scoring with a delightful backheel finish, but Japan levelled through Yui Hasegawa before twice hitting the woodwork.

Japan captain Saki Kumagai blocked a shot from Vivianne Miedema with her arm and referee Melissa Borjas controversially pointed to the spot.

Martens made no mistake from 12 yards with her sixth career goal against Japan, her latest strike moving her clear as Netherlands' leading Women's World Cup scorer.

Defending champions the United States are the only non-European side remaining in the competition, with the quarter-finals getting under way on Thursday when Norway play England.

Full-Time @AzzurreFIGC HAVE ONLY GONE AND MADE THE QUARTERS!

Earlier in the day, Italy sealed their progression with a 2-0 defeat of China.

Valentina Giacinti scored to give Milena Bertolini's side an early advantage and Aurora Galli struck from 20 yards in the second half, the substitute netting for the third time off the bench in this World Cup.

Li Ying and Wang Shanshan had late chances at Stade de la Mosson in Montpellier but could not find a breakthrough.

Italy are in the last eight for the first time since 1991, with their meeting against Netherlands set for Saturday.