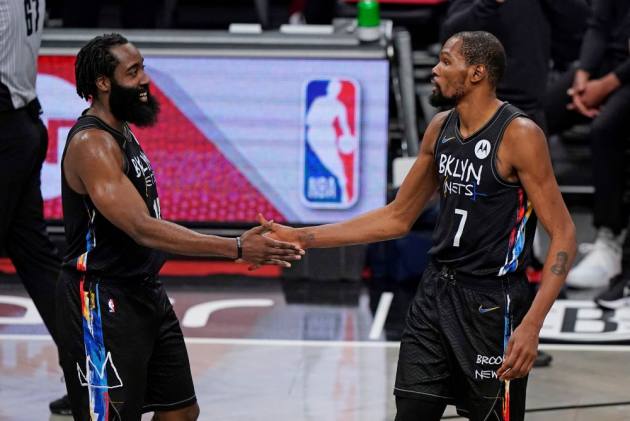 The Brooklyn Nets' stars delivered in a win over the Los Angeles Clippers, while Fred VanVleet made history for the Toronto Raptors. (More Sports News)

The Nets' 'Big Three' – Kevin Durant, James Harden and Kyrie Irving – led Brooklyn past the Clippers 124-120 in the NBA on Tuesday.

Harden posted a triple-double of 23 points, 14 assists and 11 rebounds, while Irving had a game-high 39 points and Durant finished with 28.

The Nets improved to 14-9 with victory over a Clippers (16-6) side also expected to contend come season's end.

Clippers star Kawhi Leonard had 33 points and Paul George chipped in with 26.

VanVleet dominated with a record-breaking 54 points in the Raptors' 123-108 win over the Orlando Magic.

The guard broke DeMar DeRozan's franchise record of 52 points in a game.

VanVleet was 17-of-23 from the field and 11-of-14 from three-point range, while adding three rebounds, three steals and three blocks.

Stephen Curry made seven three-pointers and had 38 points and 11 rebounds, but the Golden State Warriors went down to the Boston Celtics 111-107.

Jayson Tatum led the Celtics with 27 points and nine rebounds.

Domantas Sabonis' double-double of 32 points and 13 rebounds saw the Indiana Pacers past the Memphis Grizzlies 134-116.

Damian Lillard finished with 32 points as the Portland Trail Blazers beat the Washington Wizards 132-121. Bradley Beal had 37 points for the Wizards.

Griffin below his best

Blake Griffin struggled from the field, shooting four-of-13 for 11 points in 29 minutes in the Detroit Pistons' 117-105 loss to the Utah Jazz.

Carmelo Anthony posted 21 points off the bench in the Trail Blazers' win. He moved up to 13th on the all-time scoring list.

Congrats to @carmeloanthony of the @trailblazers for moving up to 13th on the all-time SCORING list! pic.twitter.com/JZ2r0iNM8u

The Pacers (12-9) will aim for a second straight win when they take on Giannis Antetokounmpo (averaging 27.3 points, 11 rebounds and 5.7 assists per game this season) and the Milwaukee Bucks (12-8) on Wednesday.