Kyrie Irving scored 43 points for the Brooklyn Nets, whose six-game winning streak came to an end, while the Utah Jazz found some form. 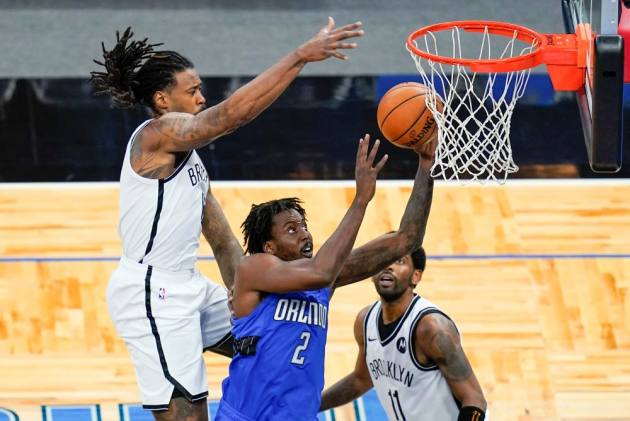 The Brooklyn Nets' six-game winning streak came to a grinding halt with a 121-113 loss to the lowly Orlando Magic, despite the return of Kyrie Irving after groin soreness. (More Sports News)

The Magic were coming into the match on a nine-game losing streak, but jumped out of the blocks with Aaron Gordon scoring 21 points in the first half.

Orlando led by as many as 12 points in the second quarter before the Nets closed to trail by only two at the main break, led by Irving, who finished with a game-high 43 points, six rebounds and four assists.

James Harden's output was slightly down, finishing with 19 points, four rebounds and nine assists as Orlando raced away again in the third.

Gordon finished with a season-high 38 points, Evan Fournier scored 31, while center Nikola Vucevic had 22 points, 14 rebounds and eight assists as the Magic pulled off an upset.

The Utah Jazz returned to the winners' list with a thrilling 115-112 triumph over the Toronto Raptors, who have now lost seven in a row.

The Jazz had lost four of six coming into the match, but found some form, led by Donovan Mitchell with 31 points and five rebounds, the star pinching the lead late after the Raptors were up by five with 90 seconds to go.

Pascal Siakam put up a three-point attempt on the buzzer which cruelly rimmed out.

Aaron Gordon heats up for a season high in the @OrlandoMagic win!@Double0AG: 38 PTS, 7-8 3PM pic.twitter.com/PTBIJR7qtC

CJ McCollum and Damian Lillard produced another special performance as the Portland Trail Blazers came from behind again to win their third straight game, 125-119 over the Dallas Mavericks.

McCollum finished with 32 points, including seven three-pointers, while Lillard had 31 points along with six assists as Portland scored 32 points to 21 in the last to win. The victory was also Portland's Terry Stotts' 500th as head coach.

Guard Malcolm Brogdon scored 27 points as the Indiana Pacers piled on the points in a 137-110 win over the Miami Heat.

Mason Plumlee had 16 rebounds while Frank Jackson scored 23 points as the struggling Detroit Pistons won back-to-back games, 113-100 over the Houston Rockets, who have lost 19 in a row.

Trail Blazers forward Carmelo Anthony, 36, scored 18 points in Portland's win but he also brought up the milestone of 27,000 NBA points, becoming only the 11th player to reach the figure.

The Toronto Raptors' slide is a major concern now, having lost seven games in a row. They were unlucky with Siakam's late attempt but they have now won only once in their past 10 and are 17-24.

Giannis Antetokounmpo's Milwaukee Bucks (26-14) host the San Antonio Spurs (22-16) in the pick of the five games on Saturday.