The top-seeded Carlos Alcaraz seemed to take a while to find his proper rhythm and had to save a number of break points in his first two service games of the final. 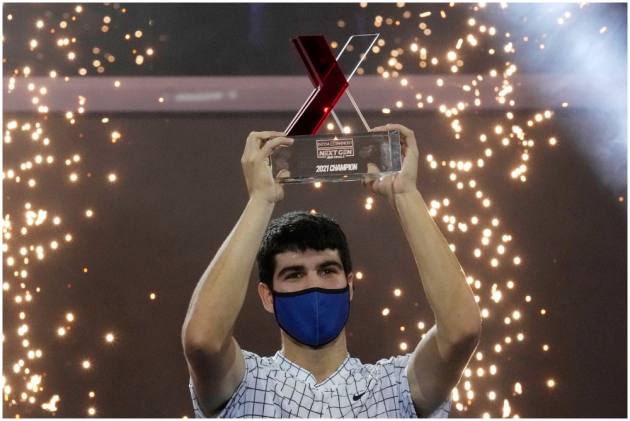 Just as he had done all week, Carlos Alcaraz dominated in Milan to beat Sebastian Korda of the United States and win the Next Gen ATP Finals, capping a brilliant season for the Spanish teenager.  (More Tennis News)

The top-seeded Alcaraz seemed to take a while to find his proper rhythm and had to save a number of break points in his first two service games of the final. But once the 18-year-old was in his stride there was no turning back as he saw off Korda 4-3 (5), 4-2, 4-2 in 82 minutes on Saturday.

“Great players like Stefanos (Tsitsipas), Jannik (Sinner) have won this tournament but winning this tournament doesn't mean anything if you don't combine it with hard work, with discipline that you need to achieve your dreams," Alcaraz said.

This is your time, Carlos Alcaraz. ðÂÂÂÂÂÂ

What a future. What a player! #NextGenATPFinals pic.twitter.com/8SJezGwyqM

Carlos Alcaraz will be looking to make it in rapid-quick time after coming on in leaps and bounds this season. He had just one tour-level win coming into 2021. He now has 32.

Victory in Milan saw Alcaraz become the youngest player to achieve that number of wins in a season since Andrei Medvedev went 32-11 in 1992 when he was 18.

Alcaraz has moved more than 100 places up the rankings this season to a career-high No. 32 and reached the U.S. Open quarterfinals.

“He's definitely playing a lot better than what his ranking is. He won't be in that spot for long,” said Korda, who is ranked number 39.

“He is everything for me. I owe him everything,” Alcaraz said when asked about his coach in an on-court interview.

Carlos Alcaraz had seen two championship points saved by Korda in the fifth game of the third set but that only delayed the inevitable as he won on his third, with a smash at the net.

“It is amazing,” Alcaraz said.

“To be able to win this tournament means a lot to me. I am so excited right now and emotional. I was very, very nervous at the start. I had to be calm to save the break points. I know Korda is serving very well, so I had to play my best in those moments.”

Both Sebastian Korda and Carlos Alcaraz had won all four of their matches in the tournament for the top 21-and-under players on the ATP Tour. Alcaraz had only dropped one set all week — in the third group game, after he had already secured a semifinal spot.

They were also the first Spaniard and American to make the final, in the fourth edition of the tournament.

The ATP Finals will also be in Italy, in Turin next week. Previous Next Gen finalists, 2018 champion Tsitsipas and Andrey Rublev, are playing in that tournament, while 2019 winner Sinner is first reserve.

There are different rules at the Next Gen tournament, including on-court coaching, no-Ad scoring, medical timeout limits, and Hawk-Eye making all the line calls.

The most drastic change is the shorter first-to-four set, with a tiebreaker at 3-3.