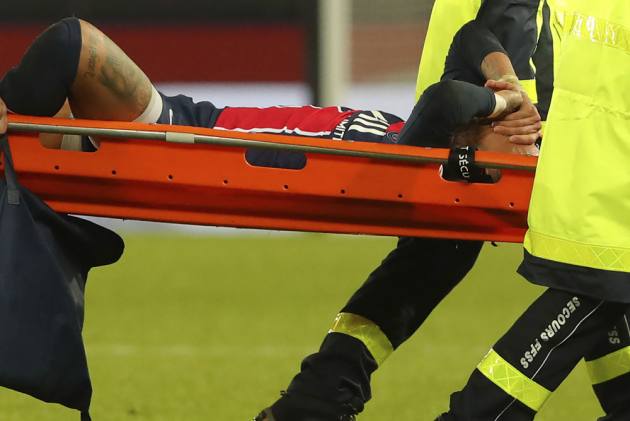 Thomas Tuchel said it is "not impossible" that Neymar could return to action for Paris Saint-Germain in this weekend's Ligue 1 clash against Lille. (More Football News)

The Brazil superstar, who has three goals and as many assists in seven Ligue 1 appearances this season, was taken from the field on a stretcher late in Sunday's surprise 1-0 defeat to Lyon.

It was initially reported Neymar, who was in tears as he left the field, had sustained a broken ankle as a result of the tackle that saw Thiago Mendes sent off following a VAR review.

However, a club statement on Monday revealed examinations on the injury were "reassuring" and that further tests would be carried out.

While he is not fit enough for PSG's clash with Lorient on Wednesday, Tuchel is holding out hope Neymar will return before the mid-season break, which starts after his side's meeting with Strasbourg on December 23.

"I can only say that it's not impossible for him to play again [before the break]," Tuchel told a media conference on Tuesday.

"We will all try all we can for the Lille game, but we will have to wait for his test results tomorrow. Then we will be able to offer more details."

20/20 - Neymar is the first player in the history of the European Cup/Champions League to score 20 goals for two different teams (Barcelona and PSG). Vision. pic.twitter.com/dV75pUE6jC

Tuchel also provided an update on the fitness of Kylian Mbappe, whom he described as being in a "red zone" after he only played the final 25 minutes at the weekend.

While Tuchel is not convinced Mbappe will be able to play in all three of PSG's games over the next week, he is confident Ligue 1's top scorer will be fit enough to start against Lorient.

"I don't know if he can play in all three games," the German said. "We will have to see how his muscles respond.

"But ahead of the most recent training session I felt that he could start for us tomorrow, but we have had many surprises in the final training sessions this season, so I am taking it with caution."

PSG's defeat to Lyon was their sixth in 20 matches in all competitions this season, their worst total at this stage since 2009-10 when also losing six times.

They enter their midweek clash with Lorient third in Ligue 1, a point behind Lille and Lyon in a wide-open title race, with Marseille a point behind and boasting two games in hand.

Prior to this match, the last time PSG were outside the top two this far into a season was ahead of their 23rd match in 2016-17 when also third.

Tuchel accepts a big improvement is needed from his side against Lorient, whom they have defeated in their last nine Ligue 1 outings, their joint-best current run against any opponent, tied with Angers and Metz.

"Everyone thinks the pressure is enormous, but honestly, I work with a team and staff and for me, what is expected of us is already the maximum," he said.

"It's not possible to feel greater pressure from you or from the outside. We always stay positive. It's football, sport, it's a challenge.

"I don't know the standings exactly. It wasn't a good enough performance in the last game, but we are the favourites and that is not going to change.

"I hope everyone now understands that this is not enough. After the Champions League success with a lot of pressure, maybe it was a decompression phase for a few days.

"Maybe I would have changed more but I didn't do that, I trusted the players. I decided to leave the team almost unchanged, but we weren't mentally ready to play this game."