Celtic's scheduled games against St Mirren and Aberdeen have been postponed, the SPFL confirmed on Tuesday 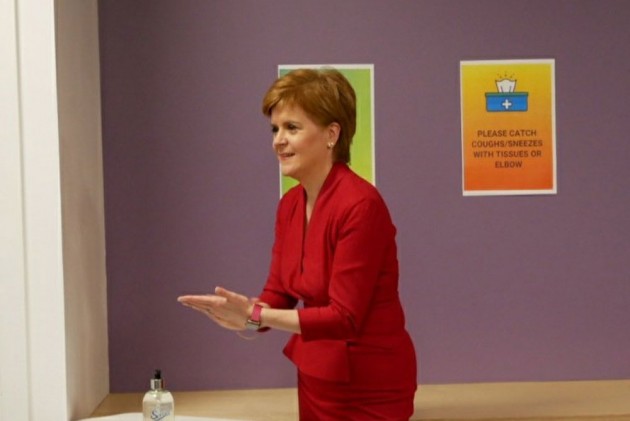 Boli Bolingoli travelled to Spain without Celtic's knowledge and did not follow quarantine rules upon his return, going on to play in the 1-1 draw against Kilmarnock on Sunday.

Celtic condemned the Belgian's "stupidity", apologising to the league for his "irresponsible action" in a strongly worded statement.

Neil Lennon's team had been due to play St Mirren on Wednesday and Aberdeen on Saturday, but those games – along with Aberdeen's midweek clash with Hamilton Academical – will not now take place.

Before the SPFL confirmed the cancellations, Sturgeon said: "I don't want the season to be in jeopardy. But we have to be very clear this situation is not acceptable.

"You should not be expecting to see Aberdeen or Celtic play over the course of the coming week. Consider today the yellow card. The next time it will be the red card because you will leave us with absolutely no choice."

Bolingoli's blunder came after two Aberdeen players tested positive for coronavirus, with eight players from the Pittodrie club issuing an apology for breaking guidelines after visiting a bar following their opening-weekend defeat to Rangers.

Sturgeon has been left furious by the footballers' conduct and said in her daily briefing on Tuesday: "What I regret is that some football players seem incapable of living up to their responsibilities."

She added: "This is just not acceptable. Every day I'm asking members of the public to make huge sacrifices in how they live their lives and the vast majority of members of public are doing that and it's not easy.

"We can't have privileged football players deciding they're not going to bother. This can't go on."

Celtic did not hold back in their condemnation of Bolingoli, who has tested negative for COVID-19.

A club statement read: "It is difficult to imagine a more irresponsible action in current circumstances and we find it beyond explanation. The club will take immediate action through our own disciplinary procedures.

"All of our playing and backroom staff have been tested twice for COVID-19 since this incident and all, including the player in question, have tested negative. While this comes as a relief to all concerned, it in no way diminishes the seriousness or stupidity of the player's actions."

Bolingoli said: "I am guilty of a major error of judgement. I know what I did was wrong and I know that I must now deal with the consequences."