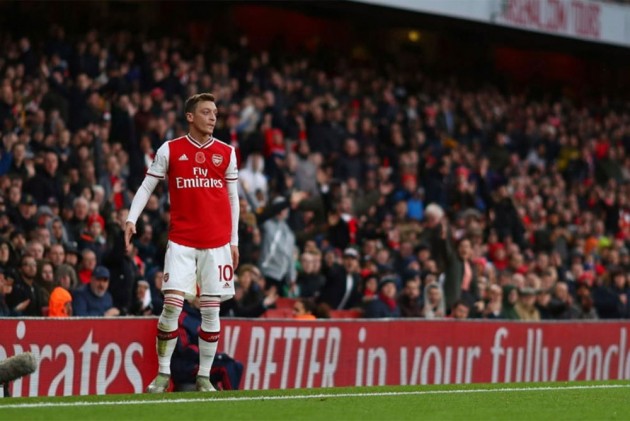 Mesut Ozil said he would bear "no grudges" after his Arsenal career went into the nosedive that led him to join Fenerbahce. (More Football News)

In a letter addressed to "Gunners", Ozil recalled the "big mix of ups and downs" during his time with the Premier League club, whom he joined from Real Madrid in September 2013.

The midfielder's long-trailed switch to the Turkish Super Lig was confirmed on Sunday.

Ozil detailed his "love" for Arsenal, his connection with the local community and his pride in seeing youngsters from the club's Hale End academy reach the first team, and promised he would be "a Gunner for life".

But the German World Cup winner also made reference to his recent time in the wilderness at Arsenal, after being left out of this season's Premier League and Europa League squads by manager Mikel Arteta.

He said it was vital that the club's "principles of class, respect and dignity must never be forgotten", and explained that from his perspective recent times at Arsenal "haven't been the easiest".

"But it is important to look for the positives in life and not the negative, which is why I try to live with no regrets and holding no grudges," Ozil added.

Ozil said that in a difficult season for Arsenal, who are sitting in mid-table in the Premier League and out of the FA Cup, everyone connected to the club "must all back the current squad and staff no matter the results".

7.5 years. Nearly 3,000 days. It feels strange to be writing this message after such a long time here in London. Since the moment I arrived, it has felt like home. I was welcomed with open arms by all the Arsenal staff, my teammates, and most importantly the incredible fans. I will always be grateful for the trust placed in me by Arsene Wenger in September of 2013. I've grown up as an adult in North London, a place I can always call home. I'll never forget that.

Being with Arsenal for so long has meant I've experienced a big mix of ups and downs. Over 250 games, 44 goals and 71 assists later, it's time that Arsenal and I finally part ways.
Together, we ended the club's 9-year trophy drought, and brought long needed silverware back to the fans who deserved it.

It is difficult for me to put into words the love I feel for this club and the fans. How could I possibly describe 8 years of gratitude in a single letter? Whilst I may be no longer playing for the club, I will continue to support them in every game they play. I will be a Gunner for life - no doubt about that. Now more than ever we must all be behind the team. This season is a tough one for every team in the Premier League, and that is why we must all back the current squad and staff no matter the results.

For me it's been amazing to see some of the boys from Hale End coming through into the first team setup. As we all know, they are the future of the club, and I wish them every success!

Hearing my name chanted around the Emirates will forever give me goosebumps, and the memories I've made putting on this jersey will stick with me for life. Much has been written about my time at Arsenal, especially in recent months. Arsenal is a club of class and prestige, something that I felt every time I walked onto the pitch. Players, staff and management always come and go - but the club's values and fans will remain forever.

The principles of class, respect and dignity must never be forgotten. It is the responsibility of every single person from the club to make sure they carry out their job in the name of these values.

As I said, the past few months haven't been the easiest. Like every player, I want to play every minute of football for my team. In life however, things do not always play out how we expect or want them to. But it is important to look for the positives in life and not the negative, which is why I try to live with no regrets and holding no grudges. Being at Arsenal was more than just football, it was about community. As much as I tried to assist on the pitch, I tried to be part of the London community as much as I could too.

North London took me in as one of its own, and every season I embarked on a different project to bring happiness to this incredible community. Although I might be leaving North London, this will not stop.

It might be the end of a chapter, but my connection with this amazing club will never fade. It might be goodbye for now, but it's not goodbye forever.

To the Arsenal fans around the world: YaGunnersYa