Not Again, Ben Stokes! Wife Rubbishes Reports Of Being Choked By England All-Rounder

Ben Stokes was recently named the Professional Cricketers' Association (PCA) player of the year after a career-defining season for him, starring in England's maiden World Cup and Ashes draw. But remains cricket's problem child 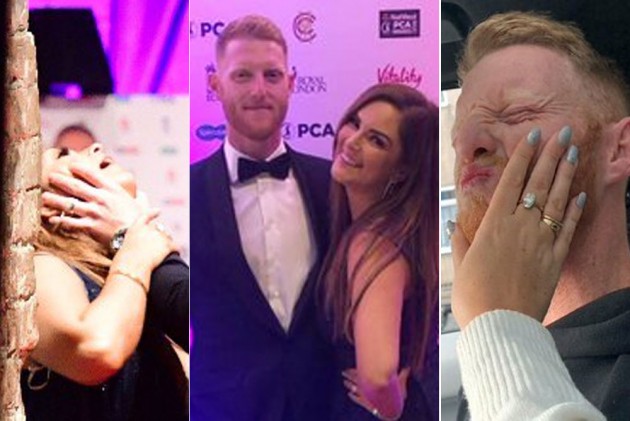 Photographs that were released by a British website showed Stokes with his left hand just above his wife's throat but Clare said that it was anything but an act of aggression.

It described the incident as following: "The evening began happily enough for the couple, enjoying a drink at the bar, chatting with a mate, everything was fine. Then something happens and Clare tells Ben she doesn’t want to hear it, speak to the hand. They go off to a side room and a row starts, anyone at the event couldn’t be unaware of something going on. All of sudden Stokes grabs his wife Clare in a chokehold and then she either falls back, pulls away or is pushed back by him. The couple left the event minutes later…"

"Unbelievable what nonsense these people will make up! Me and Ben messing about squishing up each other's faces cos that's how we show affection and some pap tries to twist it into a crazy story! And all before we then have a romantic McDonalds 20 mins later! @benstokes38 (sic.)," Claire tweeted a few minutes after the article containing the photographs went live on social media.

Unbelievable what nonsense these people will make up! Me and Ben messing about squishing up each other’s faces cos that’s how we show affection and some pap tries to twist it in to a crazy story! And all before we then have a romantic McDonalds 20 mins later! @benstokes38 pic.twitter.com/1HmPV1ZfxG

Stokes retweeted his wife and then responded with a kiss emoji.

The 27-year-old was recently named the Professional Cricketers' Association (PCA) player of the year in what has been a career-defining year for him. His all-round performances were crucial to England winning a maiden World Cup title in July and he then led England to an improbable win in the third Ashes Test at Headingley with an unbeaten 135 in the fourth innings.