Not Taking My Place In Indian Team For Granted: KL Rahul

With Rishabh Pant back in the white ball mix and Ishan Kishan also grabbing his chance with both hands, KL Rahul can't afford to relax 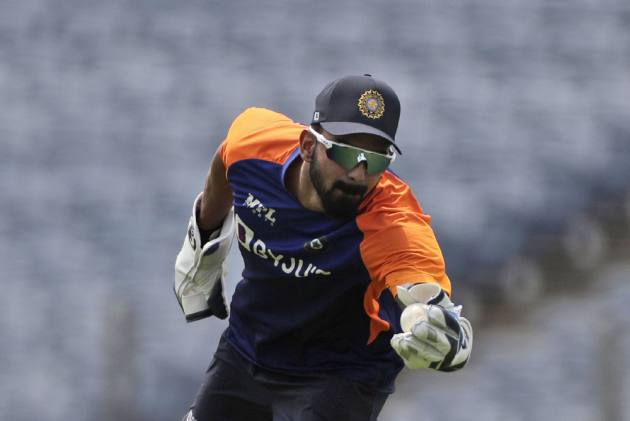 Three months without a competitive game left KL Rahul a trifle rusty but the stylish right-hander had complete faith in his preparedness, something which helped him bounce back to form in the first ODI against England in Pune. (More Cricket News)

After an indifferent T20 series against the same team, Rahul had a good first ODI scoring a half century as well as a number of catches behind the stumps.

"As a batsman I feel being in the middle and playing games is what keeps me in good touch," Rahul said on the eve of the second ODI.

"Having not got as much game time as I would have liked, I mean I won't say it did not play on my mind, but somehow or the other you have to find a way to be best prepared, be it at training or open net sessions," he explained.

"In terms of that, I tried to prepare in the best way possible but having said that, nothing beats game time," he added.

With Rishabh Pant back in the white ball mix and Ishan Kishan also grabbing his chance with both hands, Rahul knows that he cannot take his place for granted despite being one of the most prolific performers in the shorter formats.

"Look when you are a part of this Indian team you know that competition is going to be really, really high and you can never sit back and feel comfortable like you own a position. You will always be challenged and that's how it is.

"Our country has got a lot of talent, you will always try to push yourself and keep training harder and working on your game. And when opportunity comes, try to grab it with both hands," he said.

The lean patch that he encountered is part of a journey for an international cricketer, something that didn't stress him much.

"This is part of the journey and everybody goes through this. I didn't do anything different or I wasn't too stressed. As a player, you can get disappointed as I have been sitting on the bench for a while.

"After those three or three half months, I wanted to do well like every player in the team. If it doesn't happen, you accept it."

Rahul believes that one has to question own self on whether the preparation has been up to the mark or not.

"I asked myself, if I was prepared well and training hard? Was there anything which I didn't do in terms of preparation? If I did and after that, if I don't score runs, I can accept that."

But the poor run in the T20 series did disappoint him.

"I have been doing well and contributing in whatever roles and responsibilities thrown at me for last two and half years. I have always put the team ahead."

As far as the technical part is concerned, Rahul said the same technique got him runs too, so he doesn't need to question himself on it.

"When things were going right, I didn't question my process and my passion or my commitment towards the game and I didn't want to sit back and over-analyse three or four bad performances,

"You need to accept sometimes, I was doing most things right which were in my control. After that if you don't score, you move on."