Novak Djokovic Controversy: Rafael Nadal Reacts, Says There Are 'Consequences' For What We Do

Novak Djokovic was granted a medical exemption to compete in the Australian Open 2021 but his visa for entry into Australia was revoked in the early hours of Thursday, local time, and he was detained. 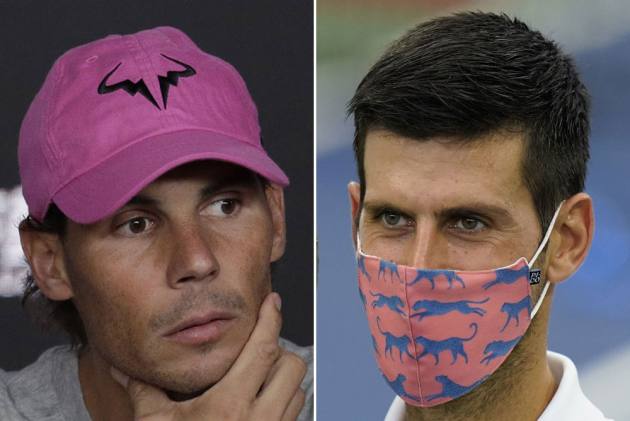 Former world number one Rafael Nadal on Thursday reacted to the ongoing Novak Djokovic saga, saying that "everybody is free to make their own decisions, but then there are some consequences." (More Tennis News)

Djokovic, 34, was granted a medical exemption to compete in the Australian Open 2021 but his visa for entry into Australia was revoked in the early hours of Thursday, local time, and he was detained.

It's reported that a full hearing between the player and the home affairs minister would be heard on Monday (January 10). Djokovic can’t be deported before that hearing. The season-opening Grand Slam starts January 17 in Melbourne. Djokovic, a nine-time champion, is the holder.

"I went through the COVID, I have been vaccinated twice. If you do this, you don’t have any problem playing here. That’s the only clear thing,” Nadal said, after beating Ricardas Berankis 6-2, 7-5 in a warm-up tournament at Melbourne Park on Thursday.

The Serbian, who has not revealed his vaccination status, is currently at an immigration detention facility in Melbourne while his lawyers have lodged to block possible deportation.

"If you are vaccinated, you can play in the Australian Open and everywhere, and the world in my opinion has been suffering enough to not follow the rules," Nadal added.

The medical exemption had been expected to allow Djokovic to play regardless of his vaccination status for COVID-19. But the Serbian also needed to meet strict border regulations to enter the country.

“Of course, I don’t like the situation that is happening. In some way, I feel sorry for him... But at the same time, he knew the conditions since a lot of months ago, so he makes his own decision.

“The only thing that I can say is I believe in what the people who know about medicine says, and if those people say that we need to get vaccinated, we need to get the vaccine," Nadal said.

The decision to grant an exception to Djokovic has sparked outrage in Australia, where there have been hard lockdown restrictions in place. And questions have also been raised about the approval of the exemption for Djokovic.

On Wednesday, Ashleigh Barty said she didn't want to talk about the Novak controversy.

"It's not my decision," Barty said. "Those decisions are made and they're completely out of my control. Ultimately I have no interest in speaking about Novak's medical history."

"Mr. Djokovic's visa has been cancelled. Rules are rules, especially when it comes to our borders. No one is above these rules. Our strong border policies have been critical to Australia having one of the lowest death rates in the world from COVID, we are continuing to be vigilant." — Australian Prime Minister Scott Morrison, on Twitter.

Mr Djokovic’s visa has been cancelled. Rules are rules, especially when it comes to our borders. No one is above these rules. Our strong border policies have been critical to Australia having one of the lowest death rates in the world from COVID, we are continuing to be vigilant.

"I told our Novak that the whole of Serbia is with him and that our bodies are doing everything to see that the harassment of the world’s best tennis player is brought to an end immediately." — read a statement from Serbian President Aleksandar Vucic.

"Not the most usual trip from Down Under" — Djokovic's coach and 2001 Wimbledon champion Goran Ivanisevic, on Instagram.

"Just to be crystal clear here. 2 separate medical boards approved his exemption. And politicians are stopping it. Australia doesn't deserve to host a grand slam." — Tennys Sandgren. The two-time quarterfinalist is not playing the Australian Open this year because of the vaccination requirement.

Both Djokovic and Nadal are bidding the break a three-way 20 Grand Slam tie in Melbourne. Roger Federer has given the season-opening Slam a miss as he continues to recover from a knee injury.