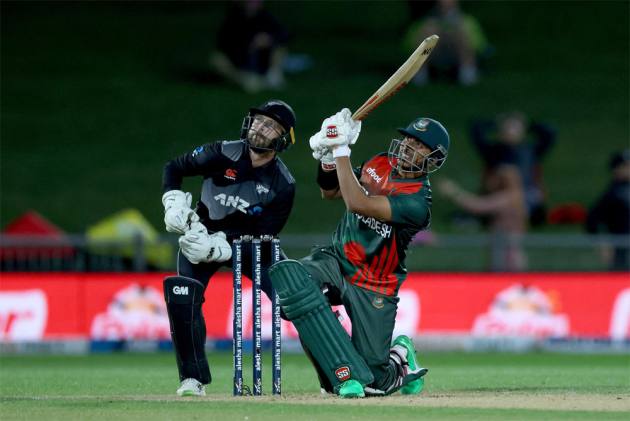 New Zealand beat Bangladesh by 28 runs in the rain-affected second Twenty20 and took a winning 2-0 lead in the three-match series on Tuesday.

Sent in by Bangladesh, New Zealand was 173-5 in the 18th over when its innings was cut short by rain. Bangladesh was set a revised winning target of 170 from 16 overs under the Duckworth Lewis system and finished 142-7.

The series win was New Zealand's seventh at home this season; four of those were in T20s, two in tests, and one in one-day internationals.

Amid bizarre scenes, Bangladesh began before match referee Jeff Crowe officially calculated its revised total. The umpires stopped the match with Bangladesh 12-0 after 1.3 overs, waiting for official notification of the new target.

There was a long delay while Crowe worked feverishly at his computer. At one point he had what appeared to be an angry exchange with Bangladesh coach Russell Domingo.

Bangladesh at times looked on pace to succeed in what would have been an extraordinary chase which required them to score mostly at 12 runs per over.

Soumya Sarkar made a half-century from 25 balls and added 81 for the second wicket with Mohammad Naim (38) to raise the hopes of the touring team.

The pair took 19 runs from the sixth over bowled by Ish Sodhi and 20 from the seventh from Adam Milne to briefly drop the required run rate below 10.

But part-time offspinner Glenn Phillips played a vital role, allowing only four runs from the eighth over and nine runs off the 10th. Sodhi gave up five runs off the ninth and the run rate climbed again.

“There were a few nerves but I've been preparing for bowling for a long time and it was nice that Tim (Southee) had the faith in me to be able to come in and bowl at that pressure time,” Phillips said.

Soumya fell to Southee for 51 in the 11th over and Bangladesh's task became insurmountable.

Phillips dismissed Naim and the speedster Milne returned to bowl Mahmudullah and Afif Hossain in the 14th over. Bangladesh slumped from 123-3 to 126-6.

New Zealand's innings moved in fits and starts, propelled at the end by Phillips who made an unbeaten 58 from 31 balls — his 50 from 27 deliveries — and Daryl Mitchell, who made 34 from 16.

Bangladesh held back its best bowler, Taskin Ahmed, until the fourth over and his arrival in the attack was eventful. Finn Allen hit his first delivery for six over the grandstand at midwicket. Allen then skied the next ball down the ground but Mahmudullah, hurrying from mid-off to mid-on, couldn't steady himself to hold the catch.

Martin Guptill hit the fourth ball for six and two balls later Allen's mistimed shot into the leg side was caught by Mohammad Naim at square leg.

Taskin was again in the spotlight when he held an outstanding catch at short fine leg to dismiss Guptill for 21. Guptill clipped a full delivery from Mohammad Saifuddin crisply off his pads, Taskin thrust out his left hand as the ball flew to him and it stuck, surprising the fielder as much as anyone.

Devon Conway was out for 15 next ball, flicking the first ball bowled by Shoriful Islam to Mohammad Mithun at square leg.

New Zealand was 81-3 after 10 overs and lost its fourth wicket soon after when Will Young was stumped on 17.

Light rain had been falling for some time and finally forced the players from the field when New Zealand was 102-4 in the 13th over. The players returned 25 minutes later with no loss of overs.

Mark Chapman was out in the first over after the restart, and Phillips and Mitchell hit out near the end, aware that the Duckworth Lewis system could come into play.