After taking a 130-run lead, Bangladesh have reduced New Zealand to 147/5 in the second innings of the first Test at the Bay Oval to inch towards a memorable victory. 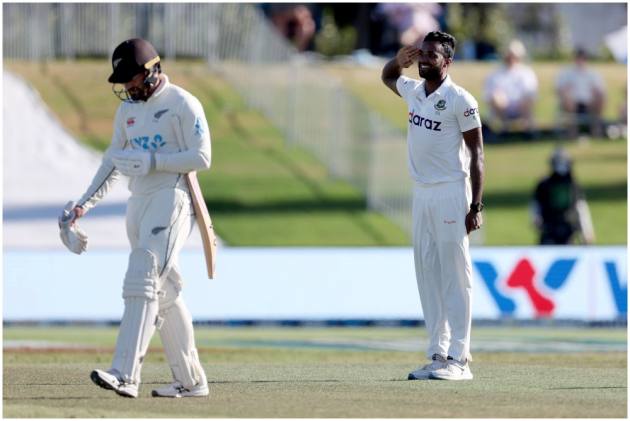 Ebadot Hossain bowled Bangladesh to the brink of a famous victory over World Test Champion New Zealand in a fiery spell Tuesday on the fourth day of the first Test at the Bay Oval on Tuesday.

On a pitch on which Bangladesh and New Zealand collectively amassed 786 runs in their first innings — with the tourists taking a 130-run lead — Ebadot reduced New Zealand to 147/5 at stumps, a lead of only 17 runs.

After dismissing first innings century-maker Devon Conway for 13, Ebadot removed Will Young (69), Henry Nicholls (0) and Tom Blundell (0) in the space of six balls to fortify the strong position the Bangladesh batters had created.

“The first thing to know about Ebadot as a person is that he only came to cricket about five years ago,” Bangladesh’s West Indies-born bowling coach Ottis Gibson said. “He won a fast-bowling competition somewhere and two years later he was playing international cricket.

“He’s a joy to work with because he’s enthusiastic and he wants to learn so much. When his confidence is high he can bowl spells like this.” New Zealand was just hanging on at stumps in the face of Ebadot’s aggressive swing bowling. Veteran Ross Taylor, in his penultimate test match before retirement, was 37 and allrounder Rachin Ravindra was 6.

Bangladesh hasn’t won any of its previous 43 matches in New Zealand across all three formats and wasn’t expected to test New Zealand in this match in the absence of veteran players such as Shakib Al Hasan, Tamim Iqbal and Mahmudullah.

But the tourists have steadily got on top of New Zealand, and Ebadot rammed home their advantage on Tuesday, finishing the day with figures of 4-39. Bangladesh first dismissed New Zealand for 328, claiming the last five wickets for 70 runs to leave it short of a par score on a docile pith at the Bay Oval.

When the tourists finally were all out, New Zealand had been in the field for more than 176 overs — the better part of two days — in hot conditions and seemed wilted when their second innings began.

Latham again was out cheaply when he dragged a short ball from Taskin Ahmed onto his stumps. Ebadot had his first wicket when Conway was caught at slip by Shadman Islam, though the Decision Review System was needed to confirm the dismissal.

Throughout the day, Bangladesh had a love-hate relationship with the DRS. Early on Mehidy twice overturned lbw decisions that had gone against him. The Conway decision also went Bangladesh’s way but they then became reckless and wasted reviews on speculative appeals.

New Zealand had begun to see some swing when they took the third new ball Tuesday and the Bangladesh seamers also found swing on the fourth day, including some reverse. The New Zealand batsman played with no real purpose other than to survive to stumps and Ebadot threw that policy into disarray when he removed Young, Nicholls and Blundell in quick succession.

Young had batted four hours for 69, his second half-century of the match, when he chopped down on a short ball from Ebadot which came off the inside edge onto his stumps. Nicholls lasted only two balls before he was bowled by a fast in-swinger and Blundell fell lbw in the next over, when his review was unsuccessful.

Taylor was dropped by Shadman off Mehidy when he was 17 but survived to stumps as New Zealand’s main hope of a defensible lead on the final day.