Bangladesh have put themselves in the driver's seat in the first Test match against New Zealand' at Bay Oval, Mount Maunganui. BAN are eyeing their first Test win in NZ. 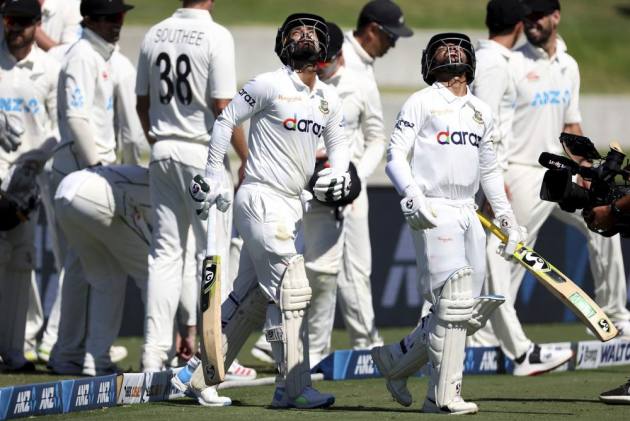 New Year 2022 has been good for Bangladesh cricket. After suffering humiliation at home against Pakistan, Bangladesh have shown a remarkable turnaround on their tour of New Zealand. And more importantly, this Bangladesh team is without three stalwarts -- Shakib Al Hasan, Tamim Iqbal and the recently retired Mahmudullah.

While it is not easy to play a tough series in New Zealand minus experienced players, Bangladesh will find new belief in the young batsmen, who are not daunted by past memories and are playing on their own terms. (DAY 4 HIGHLIGHTS)

Bangladesh have never won a Test series in New Zealand. At close on Day 4 on Tuesday, an upset seems to be a possibility. The man who has scripted a marvellous turnaround has been fast bowler Ebadot Hossain.

Ebadot Hossain's four wickets for 39 have reduced New Zealand to 147 for five, a lead of 17 runs. New Zealand now have to bat out of their skins to deny Bangladesh, who have three out of the four days in this dramatic Test match.

To dominate the World Test champions at their own den for two consecutive days has been nothing short of impressive. Bangladesh took a 130-run first innings lead and then unleashed their young pacers. It left New Zealand tottering.

Mominul Haque had led Bangladesh from the front. He chipped in with crucial breakthroughs and then scored 88 to lead Bangladesh to a 73-run, first-innings lead over New Zealand.

Mominul shared a 158-run partnership with wicketkeeper Liton Das, who made 86, steering Bangladesh to 401 for 6 at stumps on the third day in reply to New Zealand’s first innings of 328.

The partnership between Mominul Haque and Liton Das was critical for Bangladesh who, despite their outstanding performance on the second day when they claimed New Zealand’s last five wickets for 70 runs and lost only two wickets in two sessions, still had to consolidate their position.

Former captain and team director of Bangladesh Cricket, Khaled Mahmud, could not be happier.

"Very good day for our Test cricket history. It's been challenging, but our process was excellent, the boys did a very good job. Execution was proper in the way we batted, we scored maybe 226 runs today (Monday) while losing four wickets. The players have spent time between the wickets, and they have done a very good job," said Mahmud.

Not one to rejoin in advance, Mahmud on Monday knew two days were a lot in a Test match and how dramatically things can turn. The recent Test defeat against Pakistan in Chattogram will rankle. Bangladesh horribly lost a Test math where more than half of it was lost to rain.

At stumps on Monday, Yasir Ali was 11 not out and Mehidy Hasan 20. They added to the lead on Tuesday morning.

At close on Day 4, New Zealand were all at seas in the face of Ebadot's aggressive swing bowling. Veteran Ross Taylor, in his penultimate Test match before retirement, was 37 and all-rounder Rachin Ravindra was 6. Taylor will have do something spectacular to save NZ from defeat.