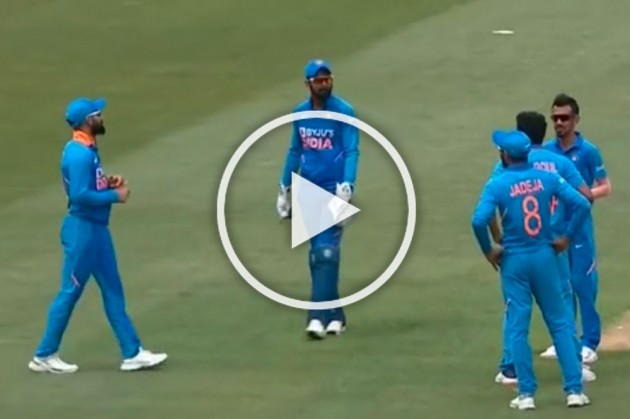 As India struggled to save the ODI series against New Zealand on Saturday at Eden Park, Auckland skipper Virat Kohli almost committed an embarrassing mistake, going for a DRS review as early as the third over at the insistence of a vigorous Shardul Thakur.

Trailing 1-0 in the three-match match, India won the toss and opted to field first. Shardul Thakur, who's been having some time in the series, got the new ball. One leg bye off the first over. That looked good. Jasprit Bumrah, sharing the new ball, conceded two singles. Then, another brilliant over followed with Thakur leaking a single off his second over.

Henry Nicholls took a single off the fourth ball then Thakur got everyone excited with a huge LBW shout against Martin Guptill. In fact, ever-enthusiastic Kohli rushed to the scene even as Thakur continued with his appeal and almost went for the 'T'. Then arrived Yuzvendra Chahal to stop the skipper from taking the review. Wicket KL Rahul joined the meeting with his view.

As it turned out, Guptill got a fine nick before the ball hit on the pads.

Put in to bat, New Zealand got off to a positive start as Guptill (79) and Henry Nicholls (41) put on 93 runs for the first wicket.

Then, Ross Taylor produced a rearguard act with an unbeaten half-century to rescue New Zealand to 273 for eight.