New Zealand are currently placed third with four points and a win against Namibia will take them closer to the second semifinal spot from Group 2. 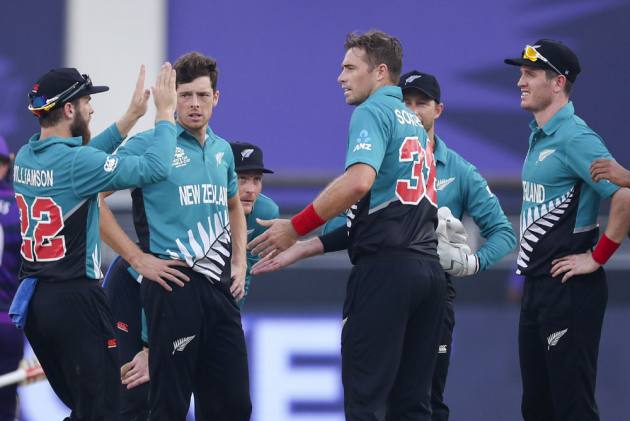 Firm favourites New Zealand will look to inch closer to the semifinals when they take on a struggling Namibia in Group 2 Super 12 game of the ICC T20 World Cup in Sharjah, UAE on Friday. (More Cricket News)

While Namibia lost their last encounter to Pakistan, the Kane Williamson led-side recorded two successive victories -- first defeating India by 8 wickets and then edging past Scotland by 16 runs.

The Kiwis are currently placed third with four points and a win against Namibia will take them closer to the second semifinal spot from Group 2 after Pakistan had already sealed their last four berth with four wins out of as many matches.

Despite a fine performance against India, New Zealand bowling has been patchy, an area which they would like to improve upon.

"We were patchy with the ball but we need to move on. Credit to Scotland for the way they played and hit the ball out of the park. We were tested and we need to learn from this," skipper Williamson had said.

The likes of left-arm speedster Trent Boult, experienced Tim Southee and Adam Milne will be eyeing a much-better show against Namibia after an ordinary outing against Scotland, while the spin duo of Ish Sodhi and Mitchell Santner would look to continue their good form.

The biggest positive for the Kiwis is the return to form of flamboyant opener Martin Guptill, who blazed his way to 93 off just 56 balls.

He would, however, need support from his opening partner Daryl Mitchell, who faltered in the last game and Williamson, who has not exactly been among the runs.

New Zealand also boasts of aggressive batters like Devon Conway, Glenn Phillips, all-rounder Jimmy Neesham and if the top and middle order fires in unison, then they can take Namibia attack to the cleaners.

Placed fifth with just two points, Namibia, other other hand, have nothing to lose.

Namibia, who gave a spirited fight against Pakistan, would be looking to do an encore, albeit this time they would look end on the winning side.

And for that to happen, Namibia bowlers Ruben Trumpelmann, David Wiese, JJ Smit and Jan Frylinck, will have to forget the hammering they received from Babar Azam and Mohammed Rizwan.

Namibia batters have got starts but they need to convert them into big scores if the minnows harbour any hopes of upsetting a strong New Zealand.

Namibia is heavily reliant on David Wiese but others also need to chip in.

While New Zealand, would be keen to record their third win on the trot, it remains to be seen whether Namibia, who have already won a lot of hearts by making the Super 12s in their maiden appearance, can spring a surprise or not.