New Zealand will start a two-match series against injury-hit Pakistan at Bay Oval on Boxing Day with an ICC World Test Championship final in their sights. 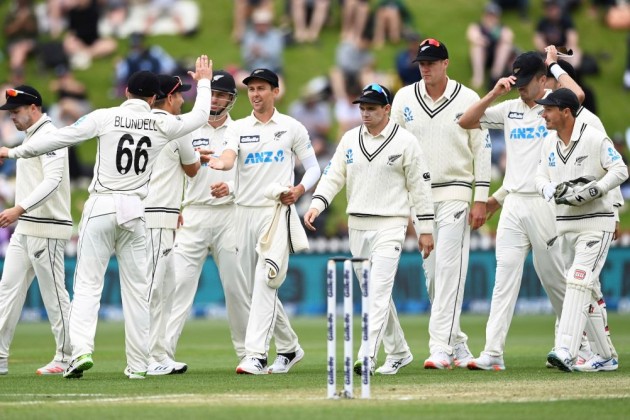 New Zealand will start a two-match series against injury-hit Pakistan at Bay Oval on Boxing Day with an ICC World Test Championship final in their sights. (More Cricket News)

The Black Caps beat Pakistan 2-1 in the Twenty20 International series and will be expected to inflict more misery on the tourists in the longest format.

A whitewash along with a heavy defeat for second-placed India against leaders Australia could see New Zealand return to Lord's for the World Test Championship decider, due to be staged next June.

Mohammad Rizwan will captain Pakistan in the first Test and may also have to lead the side in the second at Hagley Oval if Babar Azam has not recovered from a fractured thumb.

New Zealand have lost just two of their previous 13 Test series, winning 10 and drawing one, and have come out on top in their last two versus Pakistan.

Four seasons at @BayOvalOfficial this morning but we are in the nets ahead of the Boxing Day Test! #NZvPAK #CricketNation pic.twitter.com/xHnDK8dRPR

Losing world-class batsman Babar to an injury that kept him out of the T20I series was a huge blow for the tourists.

The prolific skipper will be sorely missed in Mount Maunganui, but head coach Misbah-ul-Haq hopes he will be back to lead the side in the second Test in Christchurch.

"We are hopeful that Babar will be fit for the second Test," Misbah said. "He has started gripping the bat and practising with a tennis ball.

"You can't really predict much with injuries like that but I just hope he gets better in five or six days and he has about eight days or so to get ready, which would be a big boost for us."

Pakistan have won only one of their last seven multi-game bilateral Test series outside of their own country - losing five and drawing one.

Their solitary victory was a 1-0 triumph over Australia in the United Arab Emirates in October 2018.

KANE ABLE TO LEAD BLACK CAPS, PAKISTAN SHOULD BE WARY OF WAGNER

Kane Williamson missed the Black Caps' hammering of the Windies in the second Test in Wellington following the birth of his first child, with Tom Latham stepping in.

He had struck a magnificent 251 in the first Test, a career-best in the longest format.

There was no place for Devon Conway in the squad to take on Pakistan, but Will Young retained his spot as batting cover and all-rounder Daryl Mitchell was also selected with Colin de Grandhomme (ankle) ruled out.

Pakistan must be wary of Neil Wagner, who has fond memories from the only previous men's Test to be played at Bay Oval - claiming match figures of 8-134 against England in November 2019.

Wagner has taken 21 Test wickets since the start of last year when pitching the ball short of a length, six more than anybody else during that period.

- Tim Southee is four scalps away from becoming just the third player to take 300 wickets for New Zealand (431) and Daniel Vettori (361) being the others.

- Ross Taylor needs another 95 runs to become the fourth player to score 1,000 in men's Tests between New Zealand and Pakistan. He would be the first Black Caps player to achieve a feat Javed Miandad, Asif Iqbal and Inzamam-ul-Haq can boast.

- Pakistan have won more Tests against New Zealand (25) than they have against any other opponent.