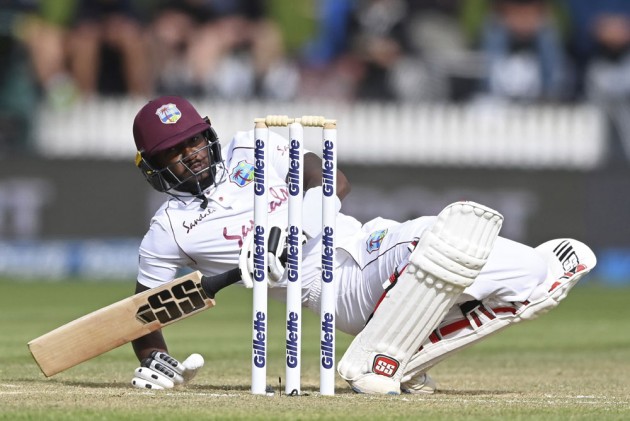 New Zealand's push for an innings victory over the West Indies in the first cricket Test was stalled on the third day Saturday by a bold, counter-attacking partnership for the tourists' seventh wicket between Jermaine Blackwood and Alzarri Joseph.

New Zealand seemed to be coasting to a win within three days when captain Kane Williamson enforced the follow-on with a 381-run lead after dismissing the West Indies for 138 in reply to its first innings of 519-7 declared.

When the West Indies were reduced to 30-4 at tea, then 89-6 in their second innings it seemed they were fated to become only the fifth team in test history to be dismissed twice in one day.

Their position was more dire because wicketkeeper Shane Dowrich could not bat in either innings because of a broken finger and they have only nine wickets.

But Blackwood and Joseph combined in an unbroken partnership which broke the dominance of the New Zealand bowlers and was worth 107 runs at stumps.

Blackwood, the West Indies' last recognized batsman, led the stubborn resistance and was 80 not out at stumps, having hit nine fours and two sixes.

Joseph, attempting to establish himself as an allrounder, achieved his maiden test half century and was 59 not out.

The pair played aggressively and managed to hit the New Zealand bowlers off the lengths which had been so successful throughout the day. Their 100 partnership came up from only 111 balls.