Ole Gunnar Solskjaer Rules Out Move For Sergio Aguero: 'If You Play For Man Utd, You Don't Go To Man City' 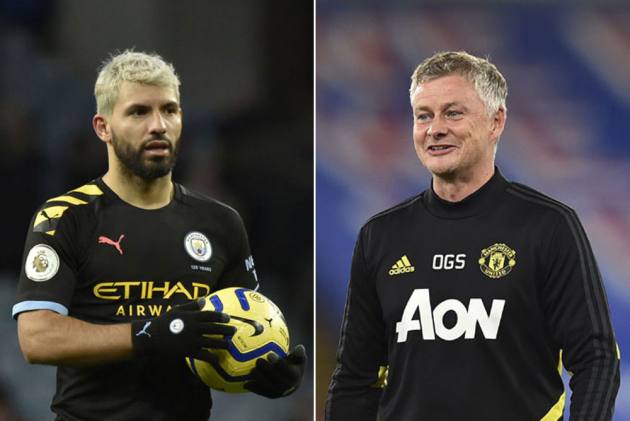 City confirmed on Monday that Aguero is to bring an end to his decade-long spell at the Etihad Stadium when his contract expires at the end of the campaign.

He will bow out as City's all-time leading scorer, with a current tally of 257 goals in 385 games, the most recent of those appearances coming against Leicester City on Saturday.

The 32-year-old has won four Premier League titles, one FA Cup and five EFL Cups, a tally he can add to before leaving as City remain on course for a quadruple this term, including a first Champions League triumph.

But despite the Premier League's fourth-highest ever goalscorer being available on a free transfer, Solskjaer does not expect Aguero to join one of the Citizens' domestic rivals.

"When I played for Man Utd, if a rival club would try to sign me and I'd gone to a rival club, where's the loyalty?" Solskjaer said.

"Of course, loyalty is one of the values I rank highly. So I wouldn't expect any player who had played for a club for 10 years to want to go to a local rival.

"I know we're professional but when you play for Man Utd, you don't go to Man City."

Well-earned victory with a great showing from the whole team. Now, getting prepared for Tuesday! And thank you all for your messages and affectionpic.twitter.com/QymtizTUkm

Peter Schmeichel, Andrew Cole and Carlos Tevez are previous high-profile examples of players to have moved between neighbours United and City during the Premier League era.

In an apparent swipe at some of his former team-mates, Solskjaer criticised those who show a lack of loyalty to their clubs by crossing the divide.

"We've had examples of that and I didn't really agree to those moves, to put it that way. I don't want to name names, but you all know who I point my finger at. Enough said," Solskjaer added.

Cole is one of three players to have scored more goals than Aguero in Premier League history with 187, along with Wayne Rooney (208) and Alan Shearer (260).

Among forwards currently at United, Edinson Cavani boasts the best goals-per-game return in the competition with one every 153.5 minutes, albeit having played just 18 games.