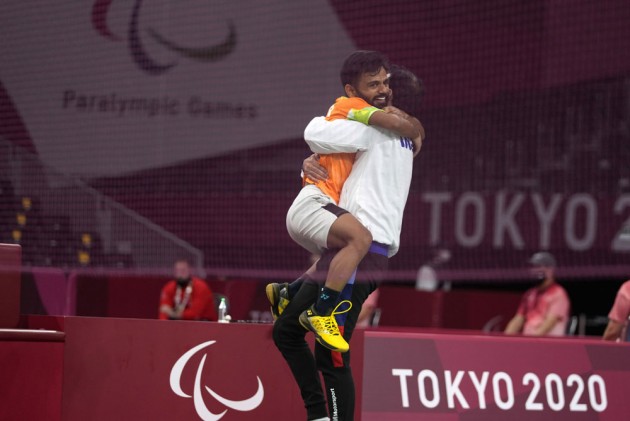 Indian badminton player Krishna Nagar on Sunday said Sunday's gold medal at the Paralympics was nothing short of a blessing as he was over the moon for just being able to compete in the Games.

"Olympics or Paralympic medal is a huge thing. We committed that we will win 5-6 medals and we have won 4 medals. One or two performances was little up and down but we will improve on that front in upcoming events," the 22-year-old said.

"Competing is a big achievement in Paralympics and we won a medal in the first edition itself. We are blessed, it is a great achievement."

Talking about the match, Nagar said: "My mindset was that I have to be positive... I didn't make many errors during the match but in the second game, when there were some negatives, I was under pressure when things got away a bit.

"For drift, I lost the second game, I was not able to play to my strength. But in the third game, there were ups and downs but I managed it well in the end."

Asked about his future plans, Suhas said: "I just want to live this moment and don't want to think about anything. It is a rare moment to get a Paralympic medal and I truly believe if the universe has given me so much, rest will also be good."

Krishna had earlier said he wants to bring smiles to his countrymen by winning a medal at Paralympics.

Asked if he wants to dedicate it to the COVID19 warriors, Krishna said: "During COVID, the doctors, volunteers and all others have worked relentlessly for us in the last 2 years, saving us from COVID.

"They have supported us so much in 2020. All over the world, doctors have shown us how to be alert."